​Every few months the question is asked: Does aid work? Sebastian Edwards, professor and former World Banker, wrote "Toxic Aid: Economic Collapse and Recovery in Tanzania" (2014) to help wade through the an answer. In short, he concludes "aid affects economic performance in a highly complex way, and through multiple and changing channels. It also underlies the fact that this is a two way relationship: aid agencies influence policies, and the reality in the recipient country affects the actions of aid agencies. This relationship is too intricate and time-dependent that it is not amendable to being captured by simple cross-country regressions; in fact, even sophisticated specifications with multiple breakpoints and nonlinearities are unlikely to explain the inner workings of the aid-performance connection." (p. 261). Success or failure largely depends on the timeframe looked at – Edwards concludes that in the long-term "Tanzania doesn't look quite like a major successful story. It rather looks like a case of a remarkable recovery, but this is not the same as outright success" (p. 254).

Edwards argues that Tanzania is a useful case study because "foreign assistance has been at the center of the country's economic failures and successes" (p. 2). Some suggest that Tanzania is a classic example of "deadly" or "toxic" aid, others argue that it is an example of success. Edwards wades through the different conclusions using a broad, long-term perspective. While the international community, the actions of donors and the impact of aid played an important role, at times Edwards over projects the aid narrative such that national priorities, policies, politics and decision making rationale are secondary, and in some ways subservient to, the donor community. For example, the author states that the "first order of business for the Mkapa administration was, as noted, to put in place a budget process that would be accepted by the donor community" (p. 218). Not one that serves its people, via that acceptance. The Tanzania story shows that this is certainly not the only driving force for decision making – most notably that President Nyerere expelled the International Monetary Fund from the country (which he knew would have negative consequences).

The failures Edwards highlights from the 1970s includes the attempted collectivization of agriculture, a bloated and inefficient parastatal sector, corruption, grandiose industrial projects, and a general collapse of the economy – on the latter he suggests "it is possible to argue that this disintegration happened because aid agencies were heavily involved in supporting (and even helping design) Nyerere's ujamaa policies" (p. 3). Again, in the concluding chapter, he writes: "After analyzing in great depth Tanzania's history during its first two decades as an independent nation, it is clear to me that the official aid community had a major responsibility in one of the most colossal collapses of a poor country in the history of the modern world. When one adds and subtracts everything – the misguided policies, the blunders, the growing corruption, and the socially worthwhile projects – the balance is hugely negative. The inescapable conclusion of that exercise is that during 1961-81 aid was worse than ineffective; it was toxic" (p. 257). Interestingly, however, is that this "responsibility" does not translate into an issue of justice when speaking about aid to Tanzania today, but rather greater "ownership" is merely a better pathway to effectiveness (see long quote below).

For the 1961-81 period, Edwards grades the aid agencies performance as a failure, and not "a run-of-the-mill "F"; it would be a failing grade with a strong worded reprimand. I would use words such as "irresponsible," "arrogant," "misguided," gullible," "ineffective" (p. 259). For 1981-94, he give a passing grade of B- and after 1996 a B+ (p. 260). The ways forward, Edwards concludes with, include: (1) ending support for grandiose, costly projects with limited impact, (2) increasing engagement with civil society, (3) strengthening institutions, (4) reducing corruption, (5) relying more on RCTs to guide development choices, and (6) beginning thinking about "the end game" for reducing aid.

The book offers interesting perspectives, such as this (long quote) on "ownership": 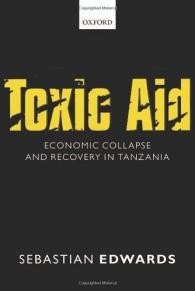 Looking for a Job in International Development?