In the 80s and 90s an emerging set of research began to highlight that much of what we thought we knew about the environment in Africa, was, at best, only partially accurate. This had implications for policy and programs - and in some instances these narratives are still present. "The Lie of the Land: Challenging Received Wisdom on the African Environment" (1996) edited by Leach and Mearns is one important collection of works that challenges assumptions or partially accurate narratives. The book is a great reference point - and I would argue that Chapter 8 (on soil erosion) remains particularly relevant.

"The driving force behind much environmental policy in Africa is a set of powerful, widely perceived images of environmental change. They include overgrazing and the 'desertification' of drylands, the widespread existence of a 'woodfuel crisis', the rapid and recent removal of once-pristine forests, soil erosion, and the mining of natural resources caused by rapidly growing populations. So self-evident do these phenomena appear that their prevalence is generally regarding as common knowledge among development professionals in African governments, international donor agencies, and non-governmental organizations. They have acquired the status of conventional wisdom: an integral part of the lexicon of development. Yet as shown by accumulating research assembled in this book, these images may be deeply misleading." (p. 1)

Part of the accuracy issue is the origin of these stories, often generalized but of problematic nature: "What is the evidence for the doomsday scenario of environmental decline? Commentators from the first decade of the century through to the present wave of environmental furore have predicted an imminent collapse. The evidence presented in support of these arguments falls into two types: first, anecdotal reports; and second, quantitative data that has been selectively interpreted. Anecdotal information, especially if dressed up in the language of disaster, have been very influential..." (p. 46-47).

In other cases, the narratives simply appear inaccurate entirely: "Since the 1890s, scientists and policy-makers have considered the patches of dense, semi-deciduous forest found scattered in the savannas on the northern margins of Guinee's forest zone to be relics of previously more extensive forest cover. There are about 800 such 'forest islands' in Kissidougou perfecture alone, most concealing at their centre a clearing containing one of the perfecture's villages. The existence of forest patches amidst savanna has suggested the penetration of savannas southward into the forest zone as a result of vegetation destruction by farmers. A century after its first elaboration, this interpretation of a landscape half empty of forests continues to drive repressive policies designed to reform inhabitants' land-use practices.This received wisdom concerning the forest-savanna mosaic refers to historical processes, but is not founded on historical data." (p. 105)

On the implications: "In the wake of the 1985 famine, the Ethiopian government launched an ambitious programme of environmental reclamation supported by donors and non-government organizations and backed by the largest food-for-work programme in Africa. Over the following five years, peasants constructed more than one million km of soil and stone bunds on agricultural land and built almost half a million km of hillside terrace. They also closed off more than 80,000 ha of hillside to most forms of use to foster regeneration of naturally occurring species, and planted 300,000 ha of trees, much of it in community wood-lots. Today, in retrospect, it is clear that much of this effort was wasted or counterproductive." (p. 186)

On the negative incentives that continue false narratives: "Scientists are just one set of actors in the 'soil erosion game', a game in which it is advantageous (a) not to admit you do not know the answer; (b) to make unverifiable assumptions so that, if your answers provide bad advice, blame does not attach to the professionals; and (c) to exaggerate the seriousness of the process in order to gain kudos, prestige, power, influence and, of course, further work." (p. 141)

This book was long before social media, but some relevant reflections on the new ways information is shared and accessed: "Paradoxically, the more rapid circulation of information may actually increase the tendency towards simplification and convergence in the substance of popular discourse about environment and development, as a way of dealing with information overload." (p. 26) 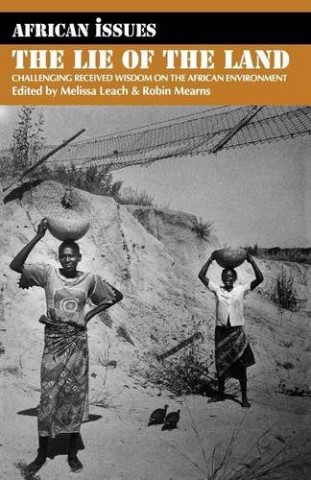