How China Escaped the Poverty Trap

Yuen Yuen Ang's "How China Escaped the Poverty Trap" (2016) is an excellent read and should be essential reading for all development studies students and actors. This book challenges many assumptions that have long been repeated as mantras in research and practice.

The author summarizes the book as one that "investigates how China escaped the poverty trap and made the Great Leap from a barren communist political economy into the middle-income, capitalist dynamo that it is today. More broadly, grounded in my analysis of China's metamorphosis, this is broadly about how development actually happens… My answer begins with a simple observation: development is a coevolutionary process. States and markets interact and adapt to each other, changing mutually over time. Neither economic growth nor good governance comes first in development." (p. 3)

The argument in summary: "Authors are often asked to give a one-line summary of their argument. Here is mine: Poor and weak countries can escape the poverty trap by first building markets with weak institutions and, more fundamentally, by crafting environments that facilitate improvisation among the relevant players… no particular solution is universally effective or ideal. Particular solutions work only when they fit the needs and resources of particular contexts and the success criteria of the players involved." (p. 16-17) Again, later in the text: "Whether it is in Western Europe, the United States, East Asia, China, or Nigeria, particular solutions work only when they fit the particular demands of their environments. Therefore, it is futile and even self-defeating to search for one replicable model believed to work always and everywhere." (p. 223)

On participation: "it must be stressed that the presence of civil society and public participation does not always produce successful collective decision making. Free-for-all participation can easily degenerate into chaos and deadlock. Indeed, Evans acknowledges, "a public administrative apparatus with the capacity necessary to both provide information inputs and implement the decisions that result from the process is a central element in making deliberation possible." Effective public participation requires a blend of top-down authority and bottom-up participation. Bottom-up participation alone does not magically produce adaptive results." (p. 58) Similarly: "It is well known that Chinese leadership makes ample use of experimentation in policy making, what I further emphasize is that effective experimentation has to be bounded. Free-for-all experimentation invites chaos, not adaptability. (p. 241)

On diversity and diversification: "Having too few or too many alternatives both impedes adaptation; effective adaptation requires a right balance of consistency and flexibility. Translated into the context of China's political system, this brings attention to the role of central leadership in setting a national agenda of change and in signalling the amount of discretion that may be exercised in different policy realms." (p. 100) Also: "The Chinese experience suggests that in order to achieve visible and rapid results, start by defining success narrowly. Focusing narrowly on a few goals (i.e. ends) should not be confused with making a few changes (i.e. means)." (p. 242)

On the downsides of the Chinese development model: "there is the problem of environmental degradation, probably the most widely discussed controversy associated with industrial transfer. Some worry that industrial transfer is merely a disguised scheme of 'pollution transfer' to underdeveloped and investment-hungry areas" (p. 214)

On inequality: "Regional inequality as a consequence of market opening and development is well-known among observers of China. It is less noticed and understood, however, that regional inequality is also a strategy of China's national development. As this chapter illuminates, a key element of China's overall development success has been to exploit highly unequal endowments across coastal, central, and western regions" (p. 221)

Ang also concisely states that "no charity could be better than thoughtless charity" (p. 238). 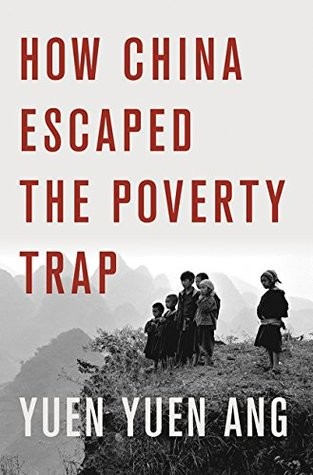