A search on Amazon for books about the southern peoples of Ethiopia suggests a dearth of ethnographic publications. However, one key source of well-informed research that is rarely available to scholars outside of Ethiopia are publications produced by Ethiopian scholars and printed by national publishers. The Forum for Social Studies is one key place to seek out such publications, and is relatively well known. However, there are a range of others. One such publication is "Social Hierarchy, Status, and Life of the Manas in Dawuro, South-West Ethiopia" by Dubale Gebeyehu (2012). I was only able to find one copy for sale on a used book dealer website (for nearly US$60, while the book sells locally for under US$2). If any readers are interested in a copy, the author graciously gave me a few and can make it available (as per availability).

Dubale's book explores "the extent of social exclusion and the resultant life conditions of the Manas – marginalized potters in the socio-cultural context of the Dawuro" (p. xi), who are located in the Southern Nations, Nationalities and Peoples' Regional State of Ethiopia. The book offers rich insight into the Dawuro, and provides important context for anyone planning to conduct research in the area.

The hierarchy is organized in very clear, largely positional, ways: "the social hierarchy of the Dawuro comprises the Maallas at the top followed by the 'slaves', artisanal groups, and the Manjja at the bottom. 'Slaves' in the Dawuro social strata are further classified into three asGodebushuwa – slaves of the royal family, Ayilliya – slaves of the commoners and Ginijaborddiya – slaves of the slaves. Similarly, the artisans are further subordinated as Wogaaciya – smiths, Degela – tanners, and the Mana – potters." (p. 9).

The hierarchy is maintained through socio-cultural processes of inclusion and exclusion: members of the mana category are "not allowed to marry from groups in the upper classes nor are their children allowed to attend schools together with the Maallas'. Similarly, they are prohibited from membership of village level associations, seera – burial association, gawuwa or zawiya – communal work groups. Politically, they are not entitled to hold official powers and leadership posts in both government institutions and different administrative levels in their locality" (p. 14-15). Furthermore, "there are differences in the utilization of public services like schools, clean water projects, health centers and other basic infrastructures available in their localities. For instances, it is unusual to hear and find such service centers in Maanas hamlets rather they are built in sites closer to the Maalla houses" (p. 115).

However, the mana are not just an oppressed and marginalized class, they are also feared as people who possess particular powers (p. 16) and as people who provide essential services to the community (p. 108). In addition, the socio-political shifts have put pressures on the social system, sometimes entrenching it and other times challenging it – such as the 1975 land redistribution (p. 92) or religion conversation (p. 110).

For those interested in the peoples of southern Ethiopia, and specifically the Dawuro, this is important read. 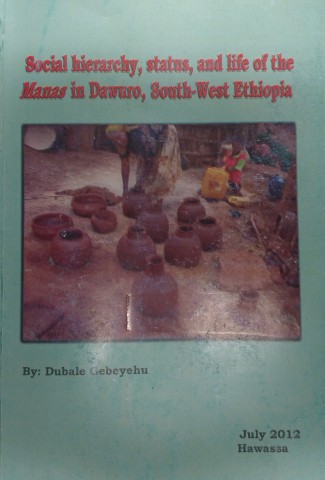 New Publication [In Press] In the International Journal of Drug Policy