Kofi Annan (1938-2018) was the Secretary-General of the United Nations from 1997 to 2006, a turbulent time to say the least. He penned "Interventions: A Life in War and Peace" (2012) with Nader Mousavizadeh to provide some of the high, lows, challenges and successes of his time leading the UN. The book is a recounting of events, for those versed in the time period, not a lot that is new, barring a few interesting reflections. A few include: 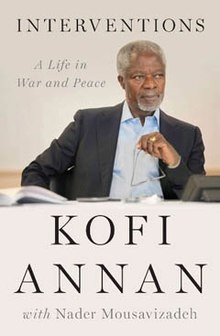