Continuing with a series of posts on democratizing knowledge about ethics (see posts on dignity, justice, and equity), this post covers ethical concepts in the Qur'an, in a book written by Toshihiko Izutsu (1914-1993), a remarkable person (one example: he spoke more than 30 languages). This book being originally written in 1959 and published by Keio University in Japan, which was titled "The Structure of the Ethical Terms in the Koran" the author revised and republished with MQUP as "Ethico-Religious Concepts in the Qur'an" in 1966. A few notes:

"I should like to begin by laying a special emphasis on what may appear at first glance almost a truism, the importance of not placing any reliance at all on the indirect evidence furnished by translated texts. Translated words and sentences are partial equivalents at the very most. They may serve as rough-and-ready guides to our fumbling first steps but in many cases they are quite inadequate and even misleading. And in any case they can never afford a reliable basis for discussion of the structure of the ethical world-view of people." (p. 4)

"The common-sense simply and naively assumes the existence of a direct relationship between words and reality. Objects are there in the first place, then different names are attached to them as labels. In this view the word table means directly this concrete thing which exists before our eyes. But the example of the word 'weed' [the unwanted plant] clearly shows that this is not the case; it shows that between the word and the thing there intervenes a peculiar process of subjective elaboration of reality." (p. 7)

"This world is transitory and vain, Islam teaches, and so you must never count upon it; if you really desire to obtain immortality and enjoy eternal bliss you should make the principal of other worldliness the very basis of your life. All is vain in this world, Jahiliyah [ignorance] preaches, and nothing is to be found beyond it, so you must enjoy your ephemeral life to the utmost limit of its capacity. Hedonism is the only possible conclusion for the worldly minded people of Jahiliyah." (p. 50)

"Just as kufr [disbelief] constitutes, as we have seen, the pivotal point round which turn all the qualities belonging to the sphere of reprehensible properties, so iman, 'belief' or 'faith', is the very center of the sphere of positive moral properties. 'Belief' is the real fountainhead of all Islamic virtues; it creates them all, and no virtue is thinkable in Islam, which is not based on sincere faith in God and His revelations." (p. 184)

"...in the Qur'an, religion is the source and ultimate ground of all things. In this sense, the ethico-religious concepts are the most important and most basic of all that have to do with morality. Moreover, Islamic thought at it's Qur'anic stage, makes no real distinction between the religious and the ethical. The ethical language of the Qur'an, however, has another important field, composed of key concepts relating to social ethics. This field too is essentially of a religious nature, since all rules of conduct are ultimately dependent on divine commands and prohibitions. But it's concepts concern horizontal relations between human beings living in the same religious community, while the ethico-religious concepts concern vertical relations between human beings and God." (p. 252) 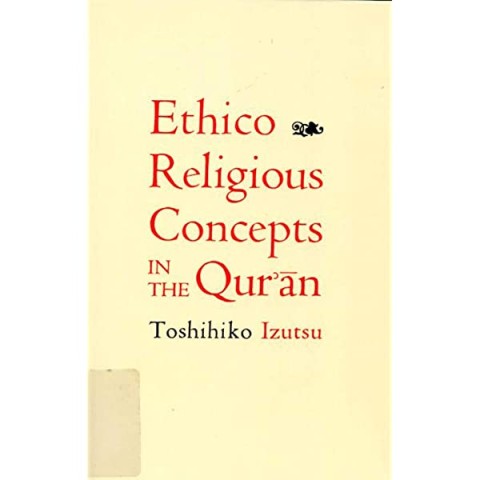