Notes from Chinua Achebe, who needs no introduction, from Home and Exile (2000):

"One morning all the animals were going to a meeting to which the town crier had summoned them the night before. Surprisingly the chicken was headed not to the public square like the rest, but away from it. When his neighbours and friends asked him if by any chance he had not heard the summons to the meeting, he said he had indeed heard but, unfortunately, must attend to a very personal matter that just cropped up. He asked them to convey his good wishes to the assembly and, for good measure, added his declaration to support and abide by its resolutions. The emergency before the animals, as it happened, was the rampant harassment that man had begun to cause them since he learned to offer blood sacrifice to his gods. After a long and heated debate the animals accepted, and passed unanimously, a resolution to offer the chicken to man as his primary sacrificial animal." (p. 14-15)

"In the end I began to understand. There is such a thing as absolute power over narrative. Those who secure this privilege for themselves can arrange stories about others pretty much where, and as, they like. Just as in corrupt, totalitarian regimes, those who exercise power over others can do anything." (p. 24)

"Let us imagine that someone has come along to take my land from me. We would not expect him to say he is doing it because of his greed, or because he is stronger than I. Such a confession would brand him as a scoundrel and a bully. So he hires a story-teller with a lot of imagination to make up a more appropriate story, which might say, for example, that the land in question could not be mine because I had shown no aptitude to cultivate it properly for maximum productivity and profitability. It might go on to say to say that the reason for my inefficiency is my very low I.Q. and explain that my brain had stopped growing at the age of ten" (p. 60)

"People have sometimes asked me if I have thought of writing a novel about America since I have now been living here some years. My answer has always been "No, I don't think so." Actually, living in America for some years is not the only reason for writing a novel on it. Kafka wrote such a novel without leaving Prague. No, my reason is that America has enough novelists writing about her, and Nigeria too few. And so it is, again, ultimately, a question of balance. You cannot balance one thing; you balance a diversity of things. And diversity is the engine of the evolution of living things, including living civilizations. To any writer who is working in the remote provinces of the world and may now be contemplating giving up his room or selling his house and packing his baggage for London or New York I will say: Don't trouble to bring your message in person. Write it where you are, take it down that little dusty road to the village post office and send it!" (p. 96) 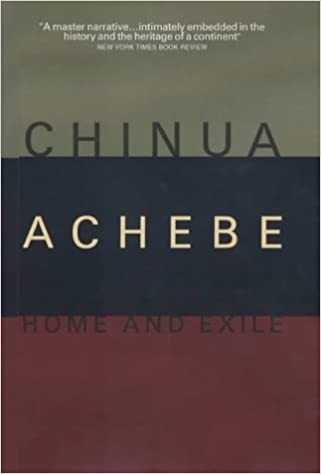