In 1965, H. S. Mann published "Land Tenure in Chore (Shoa): A Pilot Study" (data collection took place in 1963). It was Ethiopia's first land tenure study. It is a product of the Haile Sellassie I University, one of the many great publications that emerged during this time period – and which are increasingly difficult to obtain copies of. The land tenure study area took place around what is now Adama (formerly Nazareth).

The author was an FAO officer working with the then Imperial government. At the time, land tenure issues were becoming an increasingly important public issue, and indeed Haile Selassie sought to reform the tenure system. The reforms were not sufficient, and it was the land issue that contributed to his downfall. This study claims to be the first study of land tenure in the country – the study collected data on the systems of land tenure, land owner and tenant holdings, landlord-tenant relationships, and socio-economic institutions. The book also includes six appendices, which include the data collection tools and some relevant legal documents. All in 78 pages.

I hope to make this document available as a PDF in the near future. 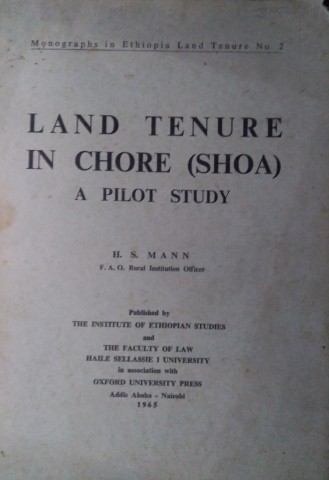