We are increasingly surrounded by technology, the data collection it employs is not only pervasive but also seemingly unescapable. In 2019 Shoshana Zuboff wrote "The Age of Surveillance Capitalism: The Fight for a Human Future at the New Frontier of Power", which has gone viral (for a social sciences academic-ish book), being cited nearly 10,000 times so far. The book is 691 pages and well beyond possible to summarize in a few lines. And, an amazing amount has changed since 2019 alone. The book may be longer than it needed to be, as the author weaves in personal and historical stories (which add layers of interesting nuance), however these also may attract a broader readership for a book than is more engaging and storytelling than a typical academic one. A few quotes to spark interest for anyone who has not yet read it.

The book begins with a definition: "Sur-veil-lance Cap-i-tal-ism, n. 1. A new economic order that claims human experience as free raw material for hidden commercial practices of extraction, prediction, and sales; 2. A parasitic economic logic in which the production of goods and services is subordinated to a new global architecture of behavioral modifications; 3. A rogue mutation of capitalism marked by concentrations of wealth, knowledge, and power unprecedented in human history; 4. The foundational framework of a surveillance economy; 5. As significant a threat to human nature in the twenty-first century as industrial capitalism was to the natural world in the nineteenth and twentieth; 6. The origin of a new instrumentarian power that asserts dominance over society and presents startling challenges to market democracy; 7. A movement that aims to impose a new collective order based on total certainty; 8. An expropriation of critical human rights that is best understood as a coup from above; an overthrow of the people's sovereignty."

"Surveillance capitalism operates through unprecedented asymmetries in knowledge and the power that accrues to knowledge. Surveillance capitalists know everything about us, whereas their operations are designed to be unknowable to us. They accumulate vast domains of new knowledge from us, but not for us. They predict our futures for the sake of others' gain, not ours." (p. 11)

"Google's stores of behavioral surplus now embrace everything in the online milieu: searches, e-mails, texts, photos, songs, messages, videos, locations, communication patterns, attitudes, preferences, interests, faces, emotions, illnesses, social networks, purchases, and so on. A new continent of behavioral surplus is spun each moment from the many virtual threads of our everyday lives as they collide with Google, Facebook, and, more generally, every aspect of the internet's computer-mediated architecture. Indeed, under the direction of surveillance capitalism the global reach of computer mediation is repurposed as an extraction architecture." (p. 128-129)

"Surveillance capitalism's antidemocratic and antiegalitarian juggernaut is best described as a market-driven coup from above. It is not a coup d'etat in the classic sense but rather a coup de gens: an overthrow of the people concealed as the technological Trojan horse that is Big Other. On the strength of its annexation of human experience, this coup achieves exclusive concentrations of knowledge and power that sustain privileged influence over the division of learning in society: the privatization of the central principle of social ordering in the twenty-first century. Like the adelantados and their silent incantations of the Requirimiento, surveillance capitalism operates in the declarative form and imposes the social relations of a premodern absolutist authority. It is a form of tyranny that feeds on people but is not of the people. In a surreal paradox, this coup is celebrated as "personalization," although it defiles, ignores, overrides, and displaces everything about you and me that is personal." (p. 513) 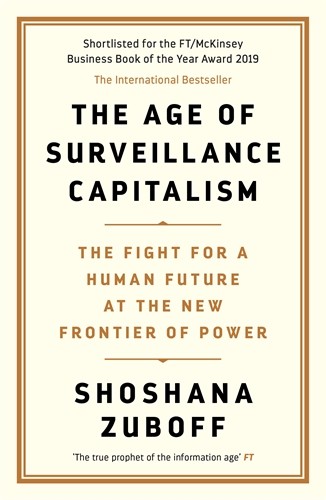 Tags:
Justice Ethics Privacy Power Surveillance Capitalism
Land to the Tiller
Is ChatGPT Manipulating You? (Or Are You Manipulat...

Equity and Fairness in Islam