In development studies and practice there are some key voices advocating for organizational changes. Ben Ramalingam, Duncan Green, Danny Burns and Stuart Worsley, Dave Algoso, and the USAID Learning Lab. They are calling for complexity and systems thinking to support more informed adaptive and iterative decision making and management. As these voices gain traction, and more experimentation occurs, organizations are shifting. However, our learning have largely been within our own development silo – examples of agricultural interventions in Southeast Asia or WASH programming in East Africa. What might we learn from experimentation outside our silo? In comes McChrystal's "Team of Teams" New Rules of Engagement for a Complex World" (2015), taking us into how the military has responded to these same calls.

In many ways the story is similar. Old ways of thinking and working were not working. The author writes "For a soldier trained at West Point as an engineer, the idea that a problem has different solutions on different days was fundamentally disturbing. Yet that was the case" (p. 3). As with the individuals mentioned above, McChrystal (and co-authors) argue "that the familiar pursuit of efficiency must change course. Efficiency remains important, but the ability to adapt to complexity and continual change has become an imperative" (p. 5).

What I found most interesting is that the experimentation of the US military is not all the same as that in the humanitarian and development sector, and we ought to take note of the ideas emerging.

Change required re-making teams of staff as well as institutions: "In situations of unpredictability, organizations need to improvise. And, to do that, the players on the field need to understand the broader context. At the team level, this is self-evident. But at the broader institutional level, it is more difficult to engineer structures that are both coherent and improvisatory" (p. 143). Horizontal and vertical learning. Early lessons were taken from NASA: "take off the blinders and have people talk to each other. The basic concept requires only the unlearning of fundamentalist approaches to efficiency, but the implementation requires constant maintenance: making sure that everyone has constantly updated, holistic awareness became a full-time job for many, and required commitment and time from everyone" (p. 151-152). Notably, this included global, daily, live meetings with broad participation, having up to 7,000 people joining in. It also included transforming the structure of building and office space. But, the infrastructural changes were just the start: "Our new physical plant provided structure for our transformation, but we knew it was not enough. A new layout with an old culture can deliver the worst of both worlds: countless managers, easer to adopt the new trend that promises innovation but reluctant to abandon the org chart, have done away with cubicles only to produce a nosier, more distracting environment that is neither efficient nor effective" (p. 162).

The military called their thought and cultural transformation "shared consciousness", which McChrystal argues "demanded the adoption of extreme transparency throughout our force and with our partner forces. This was not "transparency" in the sense that it is usually used in the business world, a synonym for personal candidness. We needed transparency that provided every team with an unobstructed, constantly up-to-date view of the rest of the organization. It is the type of transparency that those of us raised in the comfort of bureaucratic silos find uncomfortable. But it would be absolutely critical to our ability to coalesce and succeed as a team of teams" (p. 163). The changes included stronger partnerships with other institutions – beyond connecting, they built relationships, and strengthened them by exchanging staff: "One of our most controversial moves was our embedding program, an exchange system we began in late 2003 in which we would take an individual from one team – say, an Army Special Forces Operator – and assign him to a different part of our force for six months – a team of SEALs, for example, or a group of analysts. Our hope was that, by allowing our operators to see how the war looked from inside other groups, and by building personal relationships, we could build between teams some of the fluency that traditionally exists within teams" (p. 176).

"It is necessary we found, to forcibly dismantle the old system and replace it with an entirely new managerial architecture. Our new architecture was shared consciousness, and it consisted of two elements. The first was extreme, participatory transparency – the "systems management" of NASA that we mimicked with our O&I forums and our open physical space. This allowed all participants to have a holistic awareness equivalent to the contextual awareness of purpose we already knew we had at a team level. The second was the creation of strong internal connectivity across teams – something we achieved with our embedding and liaison programs. This mirrored the trust that enabled our small teams to function" (p. 197). The role of the leader, interestingly, had reduced decision making (which was democratized) and greater visioning (to ensure the new processes and objectives were maintained): "Creating and leading a truly adaptive organization requires building, leading, and maintaining a culture that is flexible but also durable. The primary responsibility of the new leader is to maintain a holistic, big-picture view, avoiding a reductionist approach, no matter how tempting micromanaging may be. Perhaps an organization sells widgets – designing, building, and marketing them; that's still not where the leader is most needed. The leader's first responsibility is to the whole" (p. 231-232). 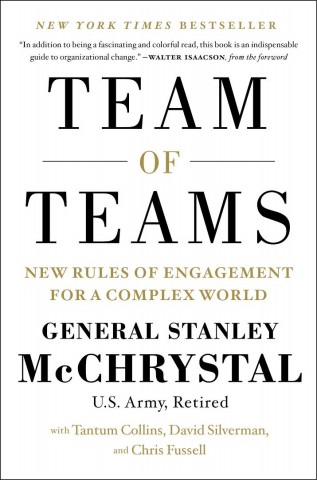