Can We Know Better? Reflections for Development

The book is structured in typical Chambers style, in chapters that could be read as thematic stand-alone contributions (with abstracts and a concluding 'agenda for reflection and action'). The book challenges, but also engages, offering avenues for new ways forward. The six chapters respectively cover: (1) error and myth, (2) biases and blind spots, (3) lenses and lock-ins, (4) rigour for complexity, (5) power, participation, and knowledge: knowing better together, and (6) knowing for a better future. The first half is the critical foundation. In it, Chambers makes the case for why we need to know better: preventing the damage being done and ending the misallocation of resources. The examples of poor, uninformed or failed policies, programmes and professional beliefs that Chambers provides in the opening chapters are largely from decades past, and one wishes that Chambers would have guided readers to see the errors in the present and challenge new us to move in new directions (hindsight is always clearer). The latter half of the book is the 'more positive and forward looking' that is 'infused with an optimism which negative academics may find naïve and those embedded in bureaucracies difficult to put into practice' (p. xiii). It is call both for learning and unlearning better.

For anyone engaged in development – from the community-based practitioner to the researcher and donor – the biases that Chambers points out (spatial, project, person, seasonal, diplomatic, professional, security, urban slum) help everyone reflect on the ways in which we need to know better, and the processes through which these biases can be confronted. This is particularly important for those based away from project areas, the 'uppers' often working in offices in capital cities. Chambers believes we have made progress on some blind spots (water, sanitation and hygiene, gender, harmful traditional practices, unpaid care, masculinities and men, sexuality, child sex abuse) but others remain 'backwaters' (corruption, entomophagy, neglected tropical diseases, cookstove air pollution, climate change and ocean ecology) (p. 31-36).

Much has been said about random control trials in recent years. Chambers makes his position very clear, and argues that the reality people experience has become distorted, limited, and narrow as mechanical and reductionist approaches of research have become the standard (e.g. randomized control trials and systematic reviews). These types of research, he argues, have been entrenched by funding requirements that require these methodologies when demanding evidence and best practices. The alternatives Chambers advocates for are participatory, contextual, qualitative, inclusive, and collaborative approaches. It might have served the book well had the case for technical, expert-driven processes also been explored. For example, the design of electrical and telecommunication systems, drinking water contamination standards and regulations, and currency and exchange policy, to name a few, require specific technical information and expert knowledge. These are also development challenges. The argument for radical transformation may have transcended the echo chamber had it been made with slightly more nuance on the contexts and questions for which inclusive and participatory approaches are necessary, and when alternatives may be considered.

While Chambers spoke about the disincentives in research and academic publishing, an additional blind spot not covered in detail in this work is human resources and the incentives within the development industry that can result in less than ideal environments for enabling the kind of transformation Chambers is calling for. In many countries, jobs within international agencies and NGOs are often amongst the most well paid, attracting highly skilled individuals from a range of private and public sectors. The salary incentive is not one that necessarily attracts the values, passion, love, courage, commitment, reflectivity, and openness for new ways of knowing that Chambers argues are so critical for knowing better (p. 161-162). Rather, it is for many the best paying job on the block. This is one reason for the continued disconnect between the proposal and the implementation (e.g. the on-going struggle for changed practice using 'do no harm' and 'gender transformative' approaches). The way forward is unclear, but this challenge cannot be underestimated when seeking to understand why the myths, biases, lock-ins, misconceptions and lenses continue.

Can We Know Better? Reflections for Development is not a final word, but a call for continuous renewal: 'there will forever be new constellations of being wrong and new ways of being right, of being in touch, up to date, and realistic. We will always need to go on learning how to know better, and through knowing better, doing better' (p. xiv). Chambers calls for humility, passion and self-reflection, and provokes readers to re-consider their own values as donors, practitioners and academics engaging with development. This is a book that should be widely read, and should be essential reading for all students in development studies as well as those planning to engage in the practice of development. 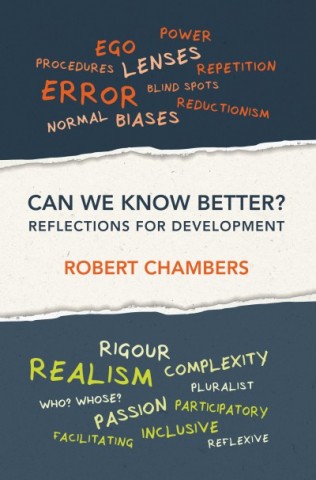 Twenty years ago Robert Chambers published "Whose Reality Counts? Putting the First Last" (1997). He challenges the academics and professionals to turn how they work upside down. His earlier book, Rural Development (1983) did similarly. In doing so, however, Chambers is not the angry dissident disowning 'development', rather he offers an optimistic vision: "That the history of development is littered with errors is, then, scarcely surprising. The other side of the coin is that if we could learn from errors and avoid them in future, 'development' would be transformed." (p. 15)

At the center of the book is an affront to who has knowledge. The assumption is the highly educated professionals. A quote summarizes a key point being made: "The following exchange was reported (1995) between a villager and a visitor after a needs appraisal for a pre-set sectoral programme: 'If we had been different people, would you have said you had the same priority need?' 'Of course not. Do you think we are stupid?'" (p. 86) If it is explicitly stated, or not, often the way 'development' activities occur conveys that 'beneficiaries' do not have knowledge. Throughout the book, Chambers focuses upon the role of "professionals" in entrenching this: "Professionalism is concerned with our knowledge, and how we learn, analyze and prescribe. In all these examples, the erroneous beliefs were embedded in the concepts, values, methods and behavior normally dominant in disciplines and professions. Those who were wrong had had long education and training, whether as macro-economists, engineers, agronomists, ecologists, foresters, administrators or social scientists. Most were highly numerate. Most were specialists… Their learning was, then, more likely to come laterally or from above than from below" (p. 31)

"It is then the reductionist, controlled, simplified and quantified construction which becomes reality for the isolated professional, not that other world, out there. There is an analogy with Plato's cave in The Republic. Unwitting prisoners, professionals sit chained to their central places and mistake the flat shadows of figures, tables, reports, professional papers and printouts for the rounded, dynamics, multi-dimensional substance of the world of those others at the peripheries. But there is a twist in the analogy. Platonism is stood on its head. Plato's reality, of which the prisoners perceived only the shadows, was of essences, each simple, unitary, abstract and unchanging. The reality, of which core professionals perceive only the simplified shadows, is in contrast a diversity: of people, farming systems and livelihoods, each a complex whole, concrete and changing. But professionals reconstruct that reality to make it manageable in their own alien analytic terms, seeking and selecting the universal in the diverse, the part in the whole, the simple in the complex, the controllable in the uncontrollable, the measurable in the unmeasurable, the abstract in the concrete, the static in the dynamic, permanence in flux. For the convenience and control of normal professionals, it is not the local, complex, diverse, dynamic and unpredictable reality of those who are poor, weak and peripheral that counts, but the flat shadows of that reality that they, prisoners of their professionalism, fashion for themselves." (p. 55)

However, Chambers does not, in the process of criticizing a particular approach and type of engagement, suggest it is valueless: "Top-down centre-periphery transfers are found worldwide. They have benefits as well as costs. At their best, they can lead to huge gains like the elimination of smallpox, the sharp reduction of polio, and the spread of literacy. At their worst, Model-Ts, whether technologies or of time-bound procedures, demoralize staff and harm people" and yet "inappropriate Model-T approaches have proved robustly sustainable. On a wide scale they continue to override local priorities, inhibit participation, obliterate diversity, and disseminate technologies which do not fit the local needs of the poorer" (p. 74-75). Chambers thus does something many find difficult to do: radically critique and challenge while also offering praise. Later, the author addresses this point: "In seeking to do better, criticism is easy. To be constructive is harder. Taking responsibility and accepting risk by actually doing something is hardest of all. But much of the best learning is through self-critical commitment to action, to engagement with the world, to learning by doing." (p. 100). This position contrasts others, like Tania Li, who prefers to stand aside and provide the supposed rational, external diagnostics.

Something that resonated with me, having struggled to convey the challenges of data collection, metrics and analysis to others, was Chamber's deconstruction of the questionnaire: "Typically, questions and categories are thought up in some central place, far removed from the field. A research funding body may even set conditions that make this mandatory…To my shame, in the early 1970s, I sat with colleagues in Cambridge (England) and drew up a questionnaire to be applied in Tamil Nadu and Sri Lanka. At the time it did not seem wrong. Nor is this behavior exceptional, even in the 1990s" (p. 93). To which I will emphasize, nor is it exceptional in 2017, unfortunately. Numerous parts of the book explore the challenges of determining what is best to measure, and how to measure it, and what it means (e.g. p. 177), which is a good reference for anyone struggling to convey the important of relevant questions, measures, metrics and analysis.

Chambers concludes: "The challenge presented by this book is to uppers, to the powerful, to the structures of power. It is to upend the normal, to stand convention on its head, to put people before things, and lowers before uppers. Imbalance is needed to establish balance. So children come before adults, women before men, the poor before the rich, the weak before the powerful, the vulnerable before the secure." (p. 211). A call to equity, a challenge to us – researchers and practitioners. 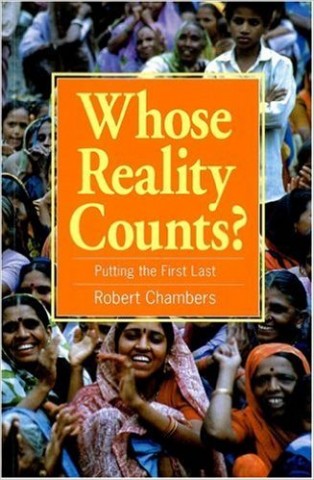