Everyday Politics of the World Economy

One of the important efforts to shift the gaze in IPE studies beyond elites and regulation was a 2007 book edited by Hobson and Seabrooke called Everyday Politics of the World Economy. I was not seeking the book out per se, but reading other works by Hobson and stumbled on it. The book covers a variation of topics (labour unions, small state tax havens, female domestic worker activism, everyday financial decisions, everyday investing, peasant movements and resistance, alternative origins of political-economic power). Parts might typically be found in collections on social movements and parts more distinct, what might today be considered part of decolonizing IPE. Book uses quite a bit of jargon, which is great for an academic book with Cambridge University Press but less so for students who are not deep into IPE).

Quotes from the Intro:

''Our everyday actions have important consequences for the constitution and transformation of the local, national, regional and global contexts . How, what, and with whom we spend, save, invest, buy and produce in our ordinary lives shapes markets and how states choose to intervene in them. The political, economic and social networks which we associate ourselves with provide us not only with meaning about how we think economic policy is made, but also constitute vehicles for how economic policy is made, both at home and abroad, should be made. Surprisingly, however, conventional work in international political economy [IPE] has little to tell us how our everyday actions transform the world economy. The conventional focus is on hegemony, trade and financial flows and international economic regulatory institutions that exist at the international level [i.e.,'the small number of big and important things']. Such examinations are conducted through reference only to the elites who wield power in the world economy or to the structures that constitute it'' (p. 1)

''One core concept that we stress in this volume is legitimacy. This concept reminds us that those who govern are obliged to make claims to the right fullness and the fairness of their actions, and those who are governed have some capacity to reject or confer these claims, either through their voice or through their actions." (p. 13) 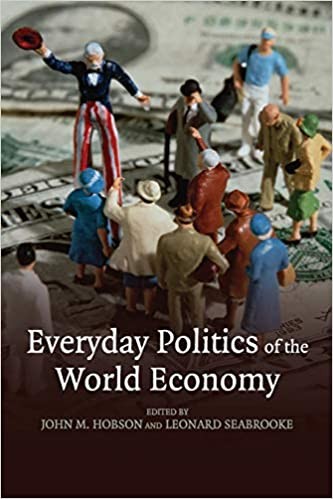