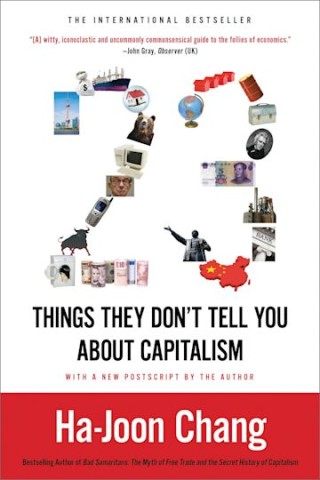 Kicking Away the Ladder

Cambridge professor of development studies, Ha-Joon Chang, is likely more known is the 'Global South' than within universities in North America or Europe – mainly because his writing takes a different approach, sometimes rather boldly so. Of his long list of publications, "Kicking Away the Ladder: Development Strategy in Historical Perspective" (2002) is the most cited. The book explores policies and institutions that were used by 'now developed countries' in order to reach their current position, and compare that with what the international development community recommends / demands of currently developing countries. In many ways, Chang challenges an entire sector with this book – the findings "will undoubtedly disturb many people, both intellectually and morally" (p. 12), as assumptions and myths are busted. In this review I focus on policies (the institutions component is also good, but has been developed by others significantly since – to be explored in future posts).

The title of this book comes from Chang's description of how nations gain advantage, and then seek to disable other nations from attaining a level of comparative status to prevent competition. Change writes "the current policy orthodoxy does amount to 'kicking away the ladder'. Infant industry promotion (but not just tariff protection, I hasten to add) has been the key to the development of most nations, and the exceptions have been limited to small countries on, or very close to, the world's technological frontiers, such as the Netherlands and Switzerland. Preventing the developing countries from adopting these policies constitutes a serious constraint on their capacity to generate economic development" (p. 10). The basis of the argument draws from the fact that "virtually all NDCs [now developed countries] actively used interventionist industrial, trade and technology (ITT) policies that are aimed at promoting infant industries during their catch-up periods" (p. 18), but current 'good' policy bars such policy.

What role do the interventionist policies play? Primarily they serve to level the playing field. Chang writes "the common problem faced by all the catch-up economies is that eh shift to higher-value-added activities, which constitutes the key to the process of economic development, does not happen 'naturally'. This is because, for a variety of reasons, there exist discrepancies between social and individual returns to investments in the high-value-added activities, or infant industries, in the catch-up economies. Given such discrepancies, it becomes necessary to establish some mechanisms to socialize the risk involved in such investments" (p. 126).

The main finding of the book – that currently recommended policies for developing countries are not what now developed countries used to develop – begs an important question: "aren't the developed countries, under the guise of recommending 'good' policies and institutions, actually making it difficult for the developing countries to use policies and institutions which they themselves had used in order to develop economically in earlier times?" (p. 3). Chang further explains: "Once a country gets ahead of other countries, it has a natural incentive to use its economic and political powers to pull ahead even further. Britain's policies, especially those of the eighteenth and nineteenth centuries, are the best examples of this. What is disconcerting is that these policies have so many parallels with those pursued in our time by developed countries in relation to their developing counterparts" (p. 51). "The plain fact is that the Neo-Liberal 'policy reforms' have not been able to deliver their central promise – namely, economic growth. When they were implemented, we were told that, while these 'reforms' might increase inequality in the short term and possibly in the long run as well, they would generate faster growth and eventually life everyone up more effectively than the interventionist policies of the early postwar years had done. The records of the last two decades show that only the negative part of the prediction has been met. Income inequality did increase as predicted, but the acceleration in growth that had been promised never arrived" (p. 128).

Chang does not leave readers to read between the lines in suggesting parallels with current and colonial practices. "By demanding from developing countries institutional standards that they themselves never attained at comparable levels of development, the NDCs are effectively adopting double standards, and hurting the developing countries by imposing on them many institutions that they neither need nor can afford' (p. 135). The author concludes that "the currently recommended package of 'good policies', which emphasizes the benefits of free trade and other laissez-faire ITT policies, seems at odds with historical experience" (p. 127) and that in numerous accounts the 'good' development policy is, in fact, 'kicking away the ladder' and hindering economic growth in developing countries. 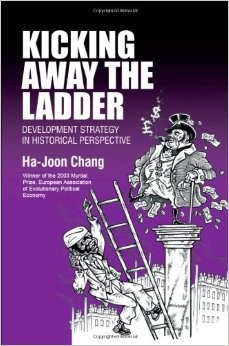