What would the world look like is the 2008 financial crisis inspired a radical transformation of society as we know it (rather than bailing out the banks to continue the status quo)? Yanis Varoufakis has ventured some answers in his Another Now (2020). The book is fictional, which the author uses to present a range of viewpoints and perspectives. In this regard, the characters provide a unique opportunity to have a discussion. For those interested in alternatives, this will be of interest. I won't spoil the story, but as a preview, the author writes:

"Costa's long-standing assessment of the crash of 2008 was that it had been too good a crisis to waste, and yet waste it we did. It could have been used to transform society radically. Instead, we not only rebuilt the world as it had been before but, by bailing out the banks and making the working people pay off the debt, we had doubled down on it, instituting a global regime in which, effectively, political and economic power had been handed over wholesale to the most bankrupt of bankers. Costa had always believed that an alternative had been available to us. A road we never took. Now, it seemed, he had Kosti's dispatches to prove it." (p. 39) 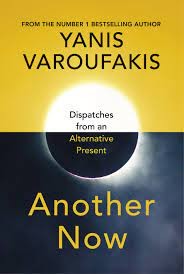