There are piles of critiques of economic indicators driving decision making, and a range of proposals for alternatives. In 2018 Eloi Laurent published "Measuring Tomorrow: Accounting for Well-Being, Resilience, and Sustainability in the Twenty-First Century", which proposes new metrics. The book gives concrete examples of metrics and existing data sets - for those interested in this subject, this is a great introduction.

"The starting point of this book is therefore that, contrary to their etymology, data are the product of values, which in turn influence human attitudes and behaviors via policy when they become indicators by the combined action of scholars and policy makers." (p. 1)

"What happened to economic analysis to make all these key insights largely forgotten for so long? The shift away from well-being and sustainability happened in two crucial steps. First, at the beginning of the twentieth century, economists decided to divorce their study from philosophy – or, more precisely, from ethics – and make it a science of efficiency, modeled on physics… Then, after the Second World War, it purported to become the science of growth. Both metamorphoses were symbolized by a single indicator: gross domestic product." (p. 5).

"…trust is the bedrock of economic activities: without it, no bank, no business, no government can long remain, let alone prosper. Trust reduces the uncertainty inherent in human behavior, turning it into acceptable or unacceptable risk… To measure trust, it is important first to define its different forms. There are essentially three of these: trust in institutions or organizations (which is by far the most important in contemporary societies), trust between people, and finally the problematic notion of "trust in the future," widely used in economic forecasting." (p. 88-89)

"The challenge posed to developed countries is that, yes, they are often more advanced in terms of good environmental practices on their own soil, but in so doing they are only paying attention to part of their environmental footprint, one that is visible and directly under their control. As their level of economic development increases, countries reduce the levels of natural resource extraction in their own territory but do not reduce their consumption of natural resources. Instead they outsource the environmental damage caused by their economic development to countries that are willing to pay the environmental costs in exchange for pay. But this cost is often paid by the poorest people who see little of the actual money." (p. 115)

"We have thus arrived, before concluding this book, at an interesting paradox. If sustainability is best measured globally, resilience and well-being are best assessed locally." (p. 189) 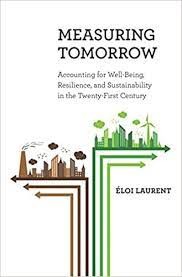