In 2015 a symposium was held at the University of Regina on "Public Engagement and the Politics of Evidence in an Age of Neoliberalism and Audit Culture", which went on to be the basis of the book "Dissident Knowledge in Higher Education", published in 2018 by the University of Regina Press. The book is edited by Marc Spooner and James McNinch. I share many of the concerns raised in the chapters, and have written about some of them myself. Rather than share a few quotes, as I typically do, I will reflect on some of the tensions that emerge when reading this book. Before moving to those tensions, this book is quite North America centric, and as I read this in Ethiopia in 2022 the situation is partly similar but also notably different (so, the title might be better specified about particular types of higher education).

Not all of these tensions are mutually exclusive. I raise them as interesting questions that the book largely does not explore, but ones that need to grappled with. 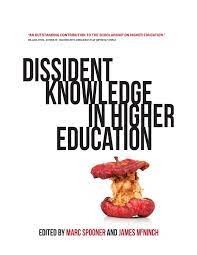