The Great Awakening vs The Great Reset

This is Part 2 of a series on the writing of Dugin (see Part 1 here). This post highlights some key points the author makes in his book The Great Awakening vs The Great Reset, translated into English in 2021 (a very short book, more like an essay at 86 pages of well spaced text). Some notes:

""Nominalism" laid the foundation for future liberalism, both ideologically and economically. Here humans were seen only as individuals and nothing else, and all forms of collective identity (religion, class, etc.) were to be abolished. Likewise, the thing was seen as absolute private property, as a concrete, separate thing which could easily be attributed as property to this or that individual owner. Nominalism prevailed first of all in England, became widespread in Protestant countries and gradually became the main philosophical matrix of New Age - in religion (individual relations of man with God), in science (atomism and materialism), in politics (preconditions of bourgeois democracy), in economy (market and private property), in ethics (utilitarianism, individualism, relativism, pragmatism)" (p. 8).

"All who oppose them are, in their eyes, "forces of darkness". And by this logic, the "enemies of open society" must be dealt with in their own severity. "If the enemy does not surrender, he will be destroyed." The enemy is anyone who questions liberalism, globalism, individualism, nominalism in all their manifestations. This is the new ethic of liberalism. It's nothing personal. Everyone has the right to be a liberal, but no one has the right to be anything else." (p. 16)

"Another argument of the Great Awakening lies with the peoples of Islamic civilization. That liberal globalism and Western hegemony are radically rejected by Islamic culture and the very Islamic religion on which that culture is based is obvious. Of course, during the colonial period and under the power and economic influence of the West, some Islamic states found themselves in the orbit of capitalism, but in virtually all Islamic countries there is a sustained and profound rejection of liberalism and especially of modern globalist liberalism." (p. 37)

"The context of the Great Awakening could become an ideological platform for the unification of the Islamic world as a whole as well, since opposition to the "Great Reset" is an unconditional imperative for almost every Islamic country. This is what makes it possible to take the globalists' strategy and opposition to it as the common denominator. Awareness of the scale of the Great Awakening would allow, within certain limits, to cancel out the acuteness of local contradictions so as to contribute to the formation of another pole of global resistance." (p. 38) 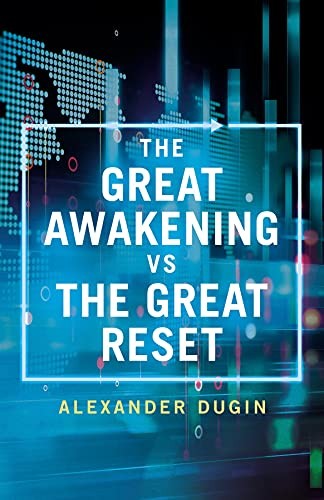