For some period in the 1980s and 1990s, there was a trend in conflict studies that suggested civil war in Africa was externally caused and driven. To counter that narrative, a group of scholars came together to explore the internal, domestic aspects of civil war in Africa (without neglecting the external factors). The result was "Civil Wars in Africa: Roots and Resolutions" (1999) edited by Taisier Ali and Robert Matthews. This edited volume provides a set of case studies on civil conflict in Ethiopia, Liberia, Mozambique, Rwanda, Somalia, Sudan and Uganda as well as how conflict did not emerge in Tanzania and Zimbabwe. As with edited volumes of this nature, they are difficult to summarize because each chapter is unique and presents its own perspectives and conclusions. A new noteworthy points:

On causes of conflict: 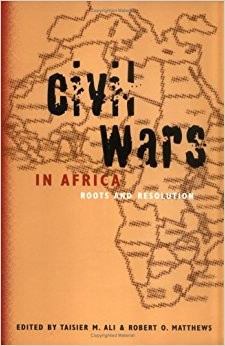