Lessons from Canada’s War in Afghanistan

The books focus is narrower than the title might imply. Saideman explains it "is neither on the decisions made in Ottawa or Kandahar nor on what Canadians encountered in Afghanistan. Instead, the premise here is what that we can learn a great deal about Canada from what is experienced in Afghanistan and how it reacted" (p. 4). As a result, the book is highly Canada- and Canadian-centric. While the book makes minor allusions to the impact the war had on Afghans and Afghanistan, there are no details on this. Readers learn only of Canadian casualties, Canadian foreign relations, Canadian media, and so forth. Contextualization is important. I suggest that this book not be read alone, but alongside others, such as: Descent into Chaos by Ahmed Rashid (2008), The Wars of Afghanistan by Peter Tomsen (2011), Return of a King: The Battle for Afghanistan by Dalrymple (2012) and The Dogs Are Eating Them Now: Our War in Afghanistan by Graeme Smith (2013).

One of the interesting discussions that Saideman weaves throughout this book is the reasoning and justification regarding why Canada went to war in Afghanistan. It is often assumed that Canada had no choice, due to its membership in NATO. The author writes that the "famous Article V, which says that an attack upon one member will be viewed as an attack upon all, includes an opt-out clause that allows each country to respond to the attacks as it 'deems necessary'" (p. 21), and thus Canada did have options. Secondly, even after agreeing to join the mission, there was a question of scale. Saideman highlights Greece, as a NATO member, which had very few (often less than 20) soldiers in Afghanistan at any time. At one point, Canada sent more than 3,000 soldiers.

Why did Canada go? And, why did it enter at such a large scale? The author explains: "To be clear, Canada did not go into Afghanistan for the sake of Afghans but to better position itself in international affairs: to solidify relations with the United States, to improve its position within NATO and support alliances at a critical time, and to visibly make a difference" (p. 40). What sorts of successes can Canada claim? According to the author these include changing the culture of the Canadian Forces, improving Canada's position within NATO, and changing the international perception of Canadian forces. From this Canada-centric perspective, the war was a "success". He concludes: "We can cloud the issue by talking about schools, vaccinations, and the like, but the reality is that Canadian leaders (three of them, from two political parties) sent troops into harm's way because of Canada's place in the world. We can look at the conflicting progress reports about what was achieved in Afghanistan, but the mission always was about Canada's commitment to its allies" (p. 125).

While the author raises what cost this had to Canada, we do not learn of the costs to Afghans and Afghanistan. "Taking all this into consideration, I think a better approach to the question 'Was it worth it?' is to think about whether the relationship with the United States and membership in NATO were worth the [Canadian] casualties and financial commitment" (p. 125). Unfortunately, the author does not raise Afghan lives as important considerations in this assessment. Saideman does not mention the over 26,000 civilians killed during the war. One lesson the author does not tease out is how willing Canada and Canadians were to engage in war and take the lives of others to improve their own standing in the world. 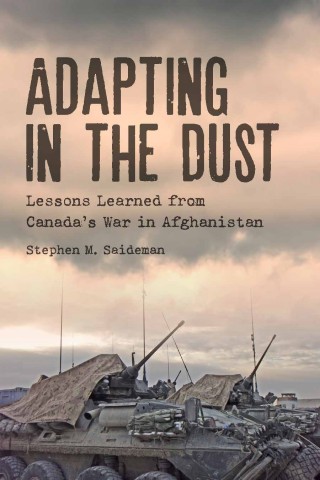 Up to three Research Assistantships for Masters students are available to work under the supervision of Professor Fiona MacPhail and/or Professor Paul Bowles (Department of Economics, University of Northern British Columbia) as part of the Corporate Mapping Project (CMP).

UNBC, in partnership with the University of Victoria, Parkland Institute and the Canadian Centre for Policy Alternatives, is conducting a multi-year research and engagement project called Mapping the power of the carbon-extractive corporate resource sector (short name: Corporate Mapping Project). Co-Directed by Professor William Carroll at the University of Victoria and Shannon Daub at the Canadian Centre for Policy Alternatives, this partnership brings academic researchers, civil society organizations, and Aboriginal participants together to study the power of the fossil fuel industry in Western Canada by investigating the ways corporate power is organized and exercised. For more information about the Corporate Mapping Project, please see www.corporatemapping.ca

As part of the CMP, Professors MacPhail and Bowles invite expressions of interest from potential graduate students to work on the CMP. Research will include mapping hydrocarbon commodity chains, identifying contentious "flashpoints" along those chains, examining corporate social responsibility documents, and interviewing groups within northern British Columbia affected by hydrocarbon development. Each Research Assistantship is tenable for two years at UNBC and is valued at $20,000. Preference will be given to students with a social science background; students applying for any graduate program at UNBC are eligible for consideration.