In their books on the history of Qatar, Fromherz and Harkness do not include Arabic, Turkish, or Farsi sources, interestingly they also do not include English books that have been translated, such as Al-Ejli's book, or original English books, as in Jassim the Leader, Founder of Qatar (2012) by Mohamed A. J. alThani (the author being a former Minister of Economy of Trade in Qatar and fellow at Oxford). This is one of several books that alter the vantage point from which history is told - particularly when the colonial record is dominant in the historical telling, listening to alternative voices is important.

alThani's book focuses on the lives and livelihoods of the period of Jassim (1825-1913), with a particular focus on the political sphere. Although is it not an academic work (sources are not cited), Ottomon and Arabic sources were used. Contrary to Harkness, alThani recognizes other sources for history, such as: "The earliest Arab geographer to mention the peninsula is Ibn Khuradadhbeh in the nineth century, recording it as one the stops en route from Basra to Oman. Al-Hamdani also mentions Qatar in the tenth century, but only among a list of places in a general description of the Arabian peninsula" (p. xvi). In contrast, in a book published in 2020, Harkness argues that Qatar first appears in a book in the 1600s (only a European source, apparently, can bring the country into being). Had these authors taken the time to read other perspectives, even if limited to those in English, the omissions might have been minimized. The author also draws on other methodological and theoretical traditions, as in ibn Khaldun. Some of this enables a form of an alternative telling of events. The book is also interesting in that the author makes note of silences and omissions in the British colonial history, thereby providing some insight into the limitations of basing history on the colonial record 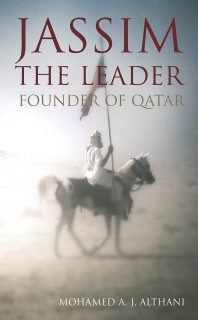