Academics tend to focus on the negatives in international development, not giving as much attention and space to reflect on what has worked well. I previously wrote about a small-scale agricultural project. Here is a brief overview of a large-scale, long-term project that facilitated systemic change:

The same year that I first arrived in Ethiopia, in 2006, the U.S. President's Emergency Plan for AIDS Relief (PEPFAR) and a range of implementing partners began working with the Government of Ethiopia to increase access to testing and treatment for HIV/AIDS. At the time, there were significant challenges. For example: 24,400 people were being treated, of more than 250,000 than required it, making ART coverage less than 9%; only 21% of women were accessing PMTCT services while an estimated 75,000 women living with HIV were giving birth annually, resulting in a large number of children being born with HIV.

During my first two years in the country I worked with facilities supporting orphaned children, often affected by and/or living with HIV. At the time, an HIV diagnosis was considered a death sentence. Treatment was largely not available. Mothers would drop off their children at orphanages after being diagnosed. Children born with HIV had a short life expectancy, often less than five years. One of the facilities in our network was a home designed to meet the needs of children living with HIV, but due to a lack of treatment their supportive role was to ensure children had a positive and happy experience in their short lives.

I have been in and out of Ethiopia during the last decade , and since 2013 have worked for a PEPFAR-supported implementing partner. Significant progress has been made, and PEPFAR as facilitated systemic change in the healthcare system. 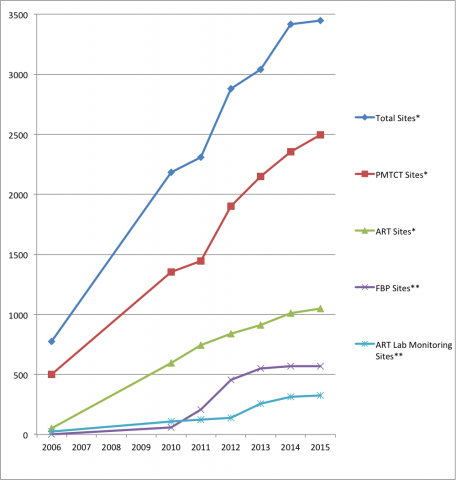 Today, HIV treatment is widely available, and provided freely. Patients on treatment are living normal healthy lives. Fewer and fewer children are being born with HIV, and those that are born with the virus have access to treatment. In 2005 there were more than 1,000,000 people living with HIV, more than a quarter of whom required treatment but only 24,400 had access to it. By 2015, the coverage for those requiring treatment has risen from under 9% to over 80%. The number of people receiving treatment rose from 24,400 to more than 344,000. The percent of women accessing PMTCT services rose from 21% to 57%. HIV prevalence has declined from 4.4% in 2003 to 1.5% in 2015.

Lots of work remains to be done, and significant challenges are yet to be addressed. That said, it is healthy to occasionally step back and recognize what has been accomplished. HIV/AIDS is now considered to be a chronic, yet treatable, disease. A diagnosis is no longer a time for questioning the care of ones children, and treatment is freely available and widely accessible to prevent mother-to-child transmission. Ethiopia is steadily progressing toward complete treatment coverage. There have been no reported treatment interruptions during the last decade. Many leaders within Ethiopia, from government leaders to religious institutions, are speaking about HIV/AIDS. The work has facilitated systemic change, and will have a lasting legacy: not only will it have changed the lives of those living with or affected by HIV, it has contributed to the development of a public healthcare system that will serve the needs of Ethiopians now and in the future.