For those interested to gain more skills that are relevant to development and humanitarian activities, this post will list free, online resources. Each includes a brief description. If you have other suggestions of free training options, send me an email and I will add them. I have recommended that you try to make this a habit - completing 2 to 3 courses every year. This will keep expanding your knowledge and skills and convey to potential employers that you are actively upgrading your knowledge and skills as a life-long learner.

One of the largest collections of online short courses that I know. The courses largely revolve around health, but also include courses on monitoring and evaluation, communications and knowledge management. This project is funded by USAID. Certificates are issued after course completion, by MEASURE Evaluation and USAID. All are available on-demand (not run on specific dates / periods of time).

This course is only run periodically. There are two courses, each cover aspects of the Problem-Driven Iterative Adaptation approach. This course is longer and more engaged that a typical short course. Highly recommended.

A large listing of online courses. Certificates are not issued for these courses (with a few exceptions), but you could say that you completed these courses on your CV. There is a large listing of topics, many of which are highly relevant to working in the development and humanitarian field. This topics are very broad, from the SDG indicators to food safety and humanitarian coordination.

Some courses require registration with the CANADEM roster (a humanitarian placement agency).

UNICEF offers a large set of online short-courses. The platform is not as user friendly as the Global Health Learning Center, but has a similarly large offering of short courses.

A number of evaluation-related courses are available via this platform. The courses are on-demand, you can take them any time.

Ethics course, research focused, but generally useful and ought to be applied more in practice.

A single course on monitoring and evaluation in the context of rural development.

These are courses that are often required before UN deployments. These courses technically are fee based. However, recently these courses were made available to members of CANADEM (https://canadem.ca/). Assuming that is still the case, you can register and then access these courses freely.

Courses relate to peace, peace making and conflict resolution. Not all are available online, and not all are free. However, there are some excellent free, online courses that can be taken here.

Sphere offers online short courses related to humanitarian standards. Note: Not all listings on this page are courses, some are stand-alone videos.

A selection of courses related to leadership and health.

Is a MOOC (Massive Open Online Course). Topics range widely and expand on an on-going basis. Courses are offered by universities, and certificates (in the "verified" stream" can be offered - at a cost), otherwise you can complete the courses freely without one. Courses include sustainable development, leadership, theory of change, management et cetera.

This is similar to Edx, a platform of MOOCs. A larger offering than Edx. Similar model of being able to complete courses freely, or have them recognized through a relatively small fee. Examples: 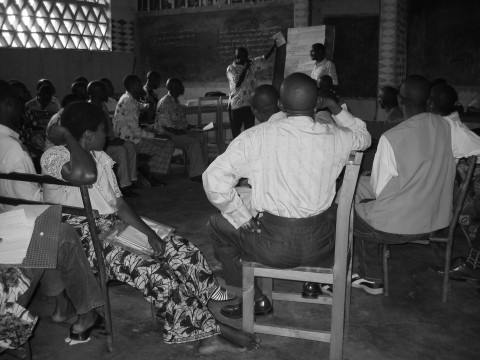 The Center for the History of Global Development, Shanghai University, invites applications for fellowships for visiting scholars working on projects related to the history of policies, concepts, practices or debates related to socio-economic development on local, national, regional or global levels. The Center for the History of Global Development is a new research focus established at the College of Liberal Arts at Shanghai University. Through conferences, workshops, publications and discussion panels, the Center seeks to contribute to interdisciplinary scholarly debates on the repercussions of "development" as a phenomenon which has shaped much of recent global history while remaining conceptually vague or contradictory.

"Development," in its most basic form, is understood as the idea that socio-economic conditions would and should improve and that specific policies should be employed to bring about such improvements. Beyond this core, development has been a highly contested concept, whose constructed character has repeatedly been emphasized. Critics point to international structures created in the name of development which have often reflected power inequalities and have served the interests of those that put them in place while doing little to improve living conditions of those at whom they were allegedly addressed. Other scholars identify perceived successes of development, measured in social indicators such as life expectancy, infant mortality, gender equality or literacy, which contradict a simplistic notion of continued failure. Different evaluations of the outcome of development tie into different interpretations of what exactly the concept does – or should – mean. Over time, Western modernization theories have been complemented by alternative concepts such as the basic needs approach, Amartya Sen's view of "development as freedom" or Herman Daly's insistence on "development" as a strictly qualitative notion, to be distinguished from economic growth. In addition, the idea of "sustainable development", and, more recently, Southern concepts such as "Buen Vivir" or "Ubuntu," have also gained traction, each with its own package of contested meanings.

Despite this lack of precision, "development" continues to be widely used, including in categories such as "developed" or "least developed" countries, and for many people, particularly in low-income countries, "development" remains a powerful and seemingly self-evident goal. Apparently, the idea of some form of socio-economic improvement as a goal of public or private actions has resonated with societies in many parts of the world, though not necessarily with identical meanings. Meanwhile, definitions of what constituted "successes" or "failures" are similarly far from clear, and perspectives vary along with changing attitudes in public and in academia as well as with evolving evidence regarding the long-term repercussions of various forms of development.

The Center of the History of Global Development welcome applications from researchers who are taking innovative and interdisciplinary approaches to any aspects of this topic, ideally looking at ways in which the histories of different times and different places intersected. As pivotal sectors in which developmental practices have become effective, projects addressing economic, health and/or environmental aspects and their interactions are particularly welcome.

Fellows can benefit from an international academic environment and from a stimulating setting in one of the most rapidly "developing" cities of the world.

Fellows are expected to share their questions and the results of their work through lectures, both about their specific research project and about topics in their field of expertise (approximately one lecture per month). They are also expected to generally participate in the academic life of the College of Liberal Arts at Shanghai University and to cite Shanghai University in all publications to which their fellowship stay has contributed. Fellowships are open to post-doctoral and senior scholars. Preference is given to projects at an advanced state, whose outcome and publication potential is already becoming clear.

Fellowship applications can be for periods of three or six months, taken between 1 March 2017 and 28 February 2018.

Free accommodation, subsidized meals
A monthly stipend of 7,000 RMB for post-docs and 12,000 for senior scholars.
Office space and secretariat assistance
Applications should include:

The Department of Social Anthropology at the University of St Andrews (UK) is advertising 2 PhD scholarships (4 years, full time, 100% UK/EU fee waiver with maintenance stipend of approx. £14,296/year (equivalent to a RCUK stipend) and conference/research expenses) to participate in an ERC-funded research project on the ethics of oil. The start date is September 2017. Deadline for application: 16 January 2017

This project entitled "The Ethics of Oil: Finance Moralities and Environmental Politics in the Global Oil Economy (ENERGYETHICS)" offers an exciting opportunity for 2 outstanding graduates to join a major anthropological research project funded by the European Research Council - as part of the conventional track for a PhD in Social Anthropology at University of St Andrews. The project is a comparative study of how people in positions of influence within the global oil economy make financial and ethical valuations of oil. Ethnographic fieldwork will be carried out with oil companies in the US and Norway, energy analysts in the UK and the US, and fossil fuel divestment movements in Germany and the UK. Taking our starting point in people's own perceptions of and direct involvement in the oil economy, we aim to understand the relationship between oil, money and climate change. We will ask: What is the value of oil? How do such valuations, understood as both financial and ethical, intersect and inform the making of the global energy economy in oil? To what extent can oil be an important industrial resource, a profit-yielding investment opportunity and an undesired pollutant that brings about irreversible climate impacts?

We are seeking prospective candidates with an existing interest in fields such as economic life, morality and ethics, energy and climate change, corporations and organisations. Applicants are encouraged to contribute their own provisional research ideas in the form of a proposal as part of their application. Projects will have ethnographic fieldwork at their core, but may also draw on other methodologies, including archival and visual media work.

Population Data BC is seeking a Postdoctoral Fellow or Research Associate for a two-year term, with possibility for extension, to take significant leadership in a timely applied research project that will engage with the public to reform governance of access to research resources. Developments in data, technology, researcher desires, and public expectations have outpaced the outdated data access arrangements currently in use, and this program of research aims to address this issue while enhancing the legitimacy of policies for accessing new and complex linked data through consultation with a deliberatively engaged public. Objectives of this project include understanding how a deliberatively engaged public assesses and advises regarding criteria for the use of data and biospecimens, and the design and proposal of a model of sustained public involvement in data access governance in collaboration with data stewards.

Operating primarily within the School of Population and Public Health in the Faculty of Medicine at the University of British Columbia, Population Data BC is a multi-university, data and education resource facilitating secure research access to individual-level, de-identified longitudinal data on British Columbia's 4.6 million residents, linking data across various sectors such as health, education, early childhood development, workplace and the environment

Key objectives of Population Data BC are to:

The primary activities of the Postdoctoral Fellow or Research Associate include: