​Over the last year I have posted about a number of books related to civil resistance. In reading that literature, one of the works that gets frequently referred to is "Why Civil Resistance Works – The Strategic Logic of Nonviolent Conflict" by Chenoweth and Stephan (2011). Given that the field of study is a relatively niche one, the book is quite widely referenced (approaching 1,000 citations at the time of this posting). I had encountered presentations by Chenoweth as well as summaries of, and references to, this book elsewhere before reading it. The book is worth reading, as it provides a much more nuanced description of the methods and findings than what is presented elsewhere (even, I feel, by the authors). The simplified take away message has been: nonviolence is more successful than violence.

The book sets out to analyze civil action, largely comparing non-violence and violent campaigns. The authors "ask why nonviolent resistance has succeeded in some cases where violent resistance had failed in the same states, like the violent and nonviolent pro-independence campaigns in East Timor and regime-change campaigns in the Philippines. We can further ask why nonviolent resistance in some states fails during one period (such as the 1950s Defiance Campaign by antiapartheid activists in South Africa) and then succeeds decades later (such as the antiapartheid struggle in the early 1990s)" (p. 5). However, in this opening description, we start to encounter some of the challenges with quantitative assessments of complex movements. The authors have classified anti-apartheid activism in the 1990s as nonviolent. Reality was far more complex, while there were nonviolent tactics there was also violence as well as parallel violent movements. Attributing 'success' to the nonviolent components seems disingenuous. The authors say that if there was a 'significant amount of violence' (p. 13) it was not considered non-violent. However, this blurs the lines between nonviolence (in principle) versus movements who actively threaten violence (and may strategically use it in minor, demonstrative ways), both of which might be classified as nonviolent as the violence was not significant. What has not made it in the take away messages was this: "Characterizing a campaign as violent or nonviolent simplifies a complex constellation of resistance methods" (p. 12). This is important – and one of the nuances found in the book, but lost elsewhere. On methods, the identification of cases to include was not systematic (i.e. country by country), meaning that many are excluded. The authors reviewed the literature to find the cases, but many movements have not entered the academic literature. Other assessments might be complicated by the timeframe they are viewed in. For example, in the mid-2000s the violent Taliban movement might have rightly been classified as a 'failure' but that is far less clear on a longer timeframe.

Challenges aside, this is an interesting book. Beyond correlations, the authors explore processes, which I found quite insightful. For example, they write "large-scale and diverse participation may afford a resistance campaign a strategic advantage, which, in turn, increases the pressure points and enhances the leverage that the resistance achieves vis-à-vis its state adversary. The ability of nonviolent campaigns to more easily exploit these advantages of broad-based mobilization, and the high costs of prolonged disobedience and noncooperation has been so much more effective than violent resistance" (p. 41). Later, they write that the "results suggest that when regimes crack down violently, reliance on a nonviolent strategy increases the probability of campaign success by about 22 percent. Among the campaigns we explore here, backfiring may be an important mechanism through which nonviolent campaigns achieve success" (p. 51).

On long-term pathways, the authors find: "Insurgents, deposed elites, and emerging elites may perceive that violence is an effective means of expressing political preferences and gaining political power. For the losers in the conflict, who see the conflict in zero-sum terms, violence is therefore likely to remain the tactical method of choice. In other words, the constant threat of violence from all sides of the previous conflict exacerbates uncertainty rather than reducing it, thereby undermining Bernhard and Karakoc's essential element of democracy. Under such conditions, reaching mutually agreeable power-sharing arrangements and building democratic institutions are highly problematic." (p. 212) 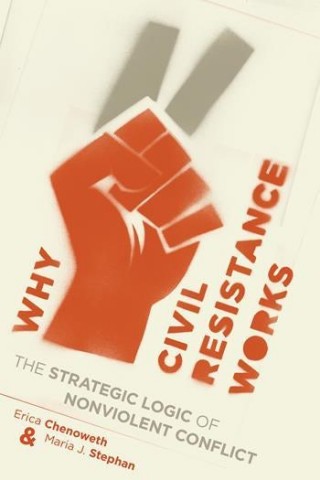 From Dictatorship to Democracy

Listening to the Grasshoppers: Field Notes on Democracy

Uncategorized
Powered by EasyBlog for Joomla!