Waqf in the Islamic World

In an earlier post I commented on the remarkable amount of land and resources managed by charitable foundations / endowments in the Middle East and North Africa, but was also challenged to find the primary source for that data (despite digging from reference to reference, only to hit dead ends). To look into the waqf (pl. awqaf) institutions of charitable foundations / endowments further I picked up Held in Trust: Waqf in the Islamic World (2011), edited by Pascale Ghazaleh and published by the American University in Cairo Press. The chapters provide some detailed case studies, which are fascinating for those interested in the topic. A few generic notes on the structure of the waqf:

"For centuries, waqfs (endowments or foundations) were a crucial part of the political, economic, and social history of the Arab and Muslim world. As service-providing institutions, waqfs were a major source of education, health care, and employment... Generally speaking, they had to consist of two main elements: first, a source of revenue, such as a building rented out for residential or commercial purposes, agricultural land that generated taxes, a public bath, or a warehouse; and second, a beneficiary, such as a mosque, a hospital, the poor, members of the founder's family, freed slaves, or any other recipient of the founder's choosing. To be valid, a waqf had to consist of an object or objects originally held in full property; the founder had to be of sound mind and body, and able to dedicate the property in question to God (in other words, a waqf could not be established by a bankrupt founder seeking to protect his property from confiscation); and the waqf had to be permanent, which meant that the revenue it generated had to be renewable, the property had to be subject to renewal or renovation, and the founder had to stipulate means of ensuring the perpetuity of the waqf and the continual disbursement of its revenues." (p. 1-2, from the editor)

"In the medieval Islamic world, many of the services today provided by modern governments and municipalities were left to 'civil agents' such as waqfs and charitable institutions. States were to provide security, against both internal and external threats, and to distribute and maintain justice. Services such as education, health, relief of poverty, public and religious constructions (mosques, ablution pools, cemeteries, baths), and infrastructure projects (water supply, bridges, roads) were all provided by the waqf system." (p. 23, from Riza Yildirim)

For the details on how these operated, the contributions to this book cover different geographies, time periods, and waqf structures. Well worth picking up for those interested. 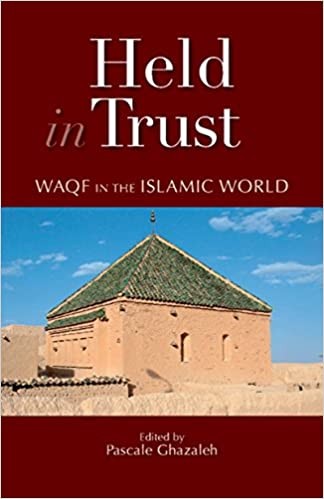