A number of authors promote civil society as a mechanism to improve aid: Dwyer (2015) argued it as an alternative to traditional, top-down aid, Roy, Negron-Gonzales, Opoku-Agyemang and Talwalker (2016) as poor people's movements, Eyben (2014) of the people-centered alternative vision of civil society, and Acemoglu and Robinson (2006) about the necessity of collective action for democratic transitions. But, little is offered in the way of critical reflections on civil society, and the ways in which it can reproduce marginalization, disempowerment and exclusion. Thus, I was pleasantly surprised to come across Stephen Ndegwa's The Two Faces of Civil Society: NGOs and Politics in Africa (1996). Although the book has its weaknesses, it draws out an important nuance that is often missed in the promotion of, and enthusiasm about, civil society.

Ndegwa seeks to assess how NGOs, as one part of civil society, "contribute to democratization in Africa and what conditions facilitate or inhibit their contributions" (p. 1). At the same time, there is a recognition that conditions are insufficient, drawing upon two case studies, which one "actively advocating political pluralism, and the other remaining politically obtuse" (p. 1). At the outset, Ndegwa suggests that: "there is nothing inherent about civil society organizations that makes them opponents of authoritarianism and proponents of democracy" (p. 6). And, therefore, civil society cannot "be assumed to be congenial to or supportive of democratic pluralism by its mere existence, expansion or level of activity" (p. 7).

On this note, which I believe is the greatest contribution forwarded with this book, the author highlights examples wherein organizations had the potential to act as brokers of change, working with marginalized people and interacting with the government, but made no attempts to do so. Instead, the NGO was "more concerned with carrying out its development projects than in engaging the state over issues touching on the interest of its client communities" (p. 66). Ndegwa suggests that the main lesson "from this case study is that although civil society organizations may be conscious of their political roles in the democratization movement and may have the resources, capacity, and political opportunity to mobilize, they may still be captives of their own institutionalization and especially of their connections to the state they are expected to challenge" (p. 78).

The context is particularly interesting, as this book focuses upon Kenya in the 1990s, and yet it appears in the mid-2010s we are having a similar conversation (as demonstrated by the authors mentioned above). The author explains: "The channeling of immense resources through NGOs reflects the conventional wisdom regarding the ability of official development agencies and, in particular, African states, to carry out development work. Riddled by inefficiency, corruption, and authoritarianism and generally lacking in accountability to its citizens, the African state has been isolated as the greatest bottleneck" (p. 20). Similarly, the experience of increasing governmental concern and regulation of NGO activity is resurfacing (including in Kenya and Ethiopia), then and now, strong civil society organizations pose threats to political power. A WhyDev blog outlines how donors are hesitant to challenge authoritarian government, so long as the expected outcomes are met, yet the Kenyan experience demonstrates how donor agencies were active and effective in supporting civil society and openly criticizing the government of Kenya, including the suspension of aid, supporting the reinstatement of multiparty elections (p. 29).

Acting upon these factors, however, is not given. And, the "explanation for the two faces of civil society lies in the willingness of the leadership of these organizations to use organizational resources against the repressive state" (p. 111). Ndegwa concludes with a recommendation not on encouraging more courageous NGO leadership, but with a shift of NGO activity towards: "Grassroots empowerment… Through projects that enhance the political capacities of local communities" (p. 117). 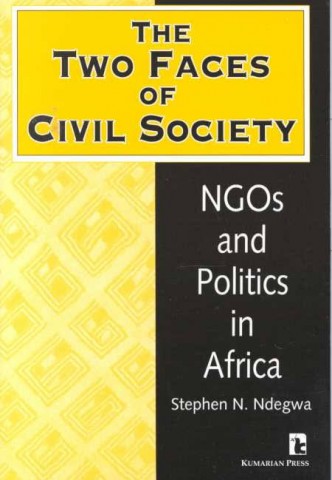