For anyone interested in international development, this is essential reading. The opening chapters of the book are academic, and I suspect this has contributed to it mostly being engaged with by academics. However, Li's book is highly recommended for practitioners, even if that means skimming some parts. What follows is not a summary of The Will to Improve, rather it pulls a selection of quotes aimed to inspire critical reflection.

On project failure (or the wrong success?): 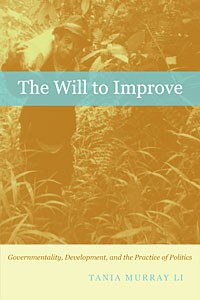