The Peasant and the State

​Dessalegn Rahmato is one of Ethiopian social scientists, his ideas and publications have shifted public perceptions on issues of land and the rural smallholder farmers. This posts draws upon his work, "The Peasant and the State: Studies in Agrarian Change in Ethiopia, 1950s-2000s" (2008), which is essential reading for anyone interesting in rural Ethiopia.

As a book that covers five decades, Dessalegn begins by setting the stage for how the change of governments was experienced by the rural farming majority: "Over this half century much has changed in the country but much also remains the same. Similarly, while the three political regimes differ radically in a number of significant respects, they also have many things in common, particularly in their relations to the peasantry, their quest for a strong presence in the countryside, and, in some respects, in their approach to development management" (p. 13). What is the same? "An enduring element of state peasant relations is the paternalist attitude towards peasants held by local officials and party activists. Indeed, paternalism permeates all levels of state officialdom, including authorities at the top, and this is reflected in some of the main rural policies of the government. The underlying assumption is that the peasantry needs strong leadership to guide it to the greater good of modernization, as well as to protect it from outsiders with evil intentions, or the foolishness of peasants themselves" (p. 261).

Regarding the shifts: "On the one hand, agrarian change has removed some of the forces of peasant domination, but on the other hand, it has enhanced the power of the state over the peasant and inhibited the agency of the rural producers" (p. 23). On the Derg, the land reform "abolished landlordism, and this, in my view, is its enduring legacy and its greatest achievement" (p. 139). On the current government and land certification: "peasant insecurity is more deep-rooted and cannot be removed merely by issuing user certificates. Peasants are dependant on local officials for interpreting the law and interpretation is frequently made to suit the given circumstances. This is one of the factors for peasant subordination, and insecurity cannot be cured without addressing the causes of subordination" (p. 205). Further, he adds the land certification is viewed by some as a success as is used low cost and local administration, but "this is a misunderstanding of the whole point of the program: title registration is meant to provide security and to minimize disputes, and this can only be possible if the program is credible in the eyes of the beneficiaries concerned" (p. 210, also see p. 240).

His focal argument in the book is that "the role played by the human agent and the institutional environment impacting on human agency is either ignored or given insufficient attention… the question of human agency, that is the agency of the men and women who are responsible for cultivating the land and managing the resources associated with it, and the institutions that have helped or hindered them in their endeavour, must be placed at the centre of the agrarian debate. My concept of the term human agency here is similar to Sen's idea of capability. By agency I mean the ability to make independent decisions and free choices to bring about a desired outcome, and to secure the benefits free of imposition or coercion. It means the ability to have a voice, and to be an active force even if in a small way… a major determining factor is the nature of the rules of governance, particularly rights, freedoms and obligations embodied either in social values and norms or formal political institutions" (p. 21). He concludes the book in arguing that "human agency is an indispensable factor in accelerating change and invigorating the economy. As we have seen already, the agrarian systems we have dealt with stifled, in one way or another, the agency of the rural producer with dire consequences of which some have been discussed at length in the preceding pages. A fundamental rethink of this issue, which I believe is overdue, will have wider implications in terms of political institutions, power relations, attitudinal and management approaches" (p. 350).

Dessalegn argues that "Famine is a measure of the vulnerability of the peasant world as well as of its resilience, a reflection of the nature of class relations as well as of the relations between the state and peasantry. Famines do not occur if [the] peasant economy is robust, if the popular classes in the rural areas have a tradition of social assertiveness and resistance, or if the state is in some manner accountable to the people" (p. 43). And, that "Ethiopian peasants have not enjoyed this kind of freedom [to choose one's leaders, to justice, to freedom of speech], and I believe this has been responsible to a large extent for the failure of agrarian progress in this country" (p. 22). He later concludes: "Rural poverty cannot be solved through the instrumentality of the state alone, but requires the active engagement of the poor themselves. Democratizations, property rights that are inclusive of the poor, enabling citizens' groups, including poor people's organizations: these, individually or in ensemble, help to expand human agency, the agency of the poor in particular" (p. 276-277) 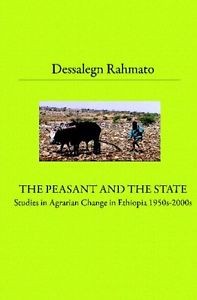