The Collapse of Globalism

For decades, globalization was promoted as a process to increase global prosperity. In 2005, John Ralston Saul published "The Collapse of Globalism and the Reinvention of the World" to make the case that globalism was on the decline. Many have praised the book as seeing well beyond its time, particularly as the financial crises followed shortly thereafter and changed many perspectives.

To set the opening scene, he writes: "Globalization emerged in the 1970s as if form nowhere, fully grown, enrobed in an aura of inclusivity. Advocates and believers argued with audacity that, through the prism of a particular school of economics, societies around the world would be taken in new, interwoven and positive directions. The mission was converted into policy and law over twenty years – the 1980s and 90s – with the force of declared inevitability. Now, after three decades, we can see the results. These include some remarkable successes, some disturbing failures and a collection of what might be best called running sores. In other words, the outcome has had nothing to do with truth or inevitability and a great deal to do with an experimental economic theory presented as Darwinian fact. It was an experiment that attempted simultaneously to reshape economic, political and social landscapes." (p. 3)

The book traces the emergence of the idea, its establishment and diverse consequences, its fall, and then predictions (written in 2005) of the future. There are glimmers of hope from the past, where new ideas turned the fall into opportunity. However, it seems negative nationalism has filled much of the ideological vacuum. Saul characterizes negative nationalism as "often dependent on ethnic loyalty, an appropriation of God to one's side, a certain pride in ignorance, and a conviction that you have been permanently wounded - that is, an active mythology of having been irreparably wronged" (p. 246). He says, in 2005, that the "general atmosphere is one of false populism, which in turn feeds into negative nationalism." (p. 253)

When the author looked forward, again in 2005, some changes were well sighted: "It is hard for any society that slips into a vacuum to admit that it is no longer advancing in any particular direction. That is particularly difficult for those individuals who hold power. Their vocabulary, their image of themselves, even their skills have all be honed to fit the certainty of a direction that no longer prevails. The sign of mediocre leaders is that they believe things will continue as they have" (p. 217). 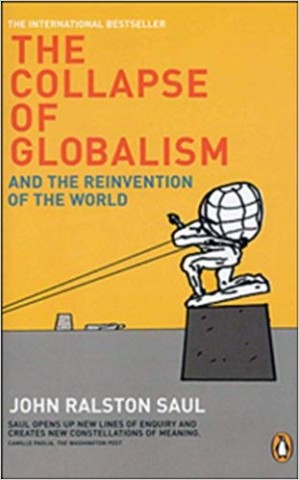