After some politically-oriented books on Qatar, I was pleased to find Neha Vora's "Teach for Arabia: American Universities, Liberalism, and Transnational Qatar" (2019). The book takes a quasi ethnographic approach to Education City (individual interviews and personal experience) and the author is reflexive about a wide range of topics and experiences. "Field" research was conducted while the author was working and teaching in Education City, between 2010 and 2014, and the writing was finished in 2016 (which shows you how slow book publishing is, as this comes out in 2019). One limitation of the book is that much is assumed about life and ideas outside of the people and place of Education City - the author did not interview anyone at Qatar University, at least for some perspective. Nonetheless, this is an interesting book, and most enjoyably, it is (self) critical - which is quite rare amongst the other volumes, many being rooted in orientalist perspectives and perpetuating colonialist attitudes (one book uncritically notes Education City as a colonization project, even celebrates it as such). Interesting in this book is the journey of the author, which she takes us along; not arriving as a scholar critical of content or assumptions, but rather was pushed to contest, challenge and critique at the demands of students (example below). A few notes:

Journeys of learning: "The class - who were about half Qatari citizens and half foreign residents who had grown up in Doha - arrived the morning after reading the chapter uniformly offended; they had clearly had a group conversation prior to our meeting. They told me the reading did not speak to them and also presented them or their classmates as exotic. Overall, they were fed up with the textbook... The students then moved on to tell me how their other classes - STEM classes - contained similar moments of tension, sometimes in the curriculum and sometimes due to their professors' presumptions about what Qataris, Arabs, and/or Muslims were like." (p. 2)

Centering and marginalizing: "Faculty and staff teach and speak what they know, and what they knew was usually refracted through the United States. In addition, the texts themselves, written in English, most often published in the United States and reflecting Euro-American disciplinary conventions, were usually geared toward American audiences with unconscious familiarity in American cultural norms. As one student told me, "of course they do bring a lot of current events into the classroom but a lot of the materials in the textbooks are so US-centered." (p. 55-56)

Upending assumptions: "Whenever I design a course now, I am reminded of that class in Doha and how much it pushed me outside of my comfort zone. It challenged me to question who I center and who I marginalize through my choice of readings and assignments, the language I use in delivering my lectures, how I assign group work, and my overall interactions with students. Today, I am a tenured faculty member at an elite liberal arts institution in the United States that markets itself as invested in critical thinking, undergraduate research experiences, diversity, and global citizenship training. The students at this institution will rarely get to experience these learning outcomes to the extent that I have witnessed students experience them at the American branch campuses in Doha, due to the diversity of students, quality of resources, and number of hand-on learning opportunities available there." (p. 3)

Liberal piety: "The categorization of places, ideas, regimes, and cultures in liberal and illiberal is fundamentally a project based on faith rather than fact, one that constantly needs to elide imperial histories, encounters with difference, and discursive and material inconsistencies in order to maintain what I call liberal piety, producing subjects who believe themselves to be liberal, cosmopolitan, and inclusive rather than parochial and complicit in ongoing forms of imperialism, Orientalism, exclusion, and American exceptionalism." (p. 9)

Contradictions: "The American university was foundationally colonial and white supremacist. The earliest universities in North America, which would become the Ivy League, were Christian missionary projects built in the name of manifest destiny and civilizing the inferior Indian. They were funded by profits accrued by white slaving elites, as well as built in part by slave labor." (p. 11)

Education system: "RAND's projects included helping to set up the Qatar National Research Fund guidelines, writing the Qatar National Research Strategy, working with Qatar Foundation on multiple projects, and assessing the national Qatar University. But their main project was focused on how to improve and develop public K-12 education. In 2007, RAND produced a report, Education for a New Era, which suggested three options for reforming what it felt was a system that had failed because of Qatari resistance to change and a lack of critical thinking in schools. All three suggested reform options were neoliberal approaches that reduced centralization and focused on parental choice..." (p. 41-42)

Priorities: "American branch campuses saw coeducation as integral to the liberal project in Doha. Branch campuses perpetuated the idea that students could not attain liberal academic progress without being in mixed classrooms, and they they could not attain full citizenship without heterosocial participation in activities outside the classroom. These understandings stemmed from the mainstreaming of liberal feminism into the US academy, and from the yoking of gender and sexuality to civilization metrics for branch campus success." (p. 81)

The voiceless: "I came to see how coeducation and other measures of liberal feminist success in Education City presumed a baseline voiceless Qatari female subject on which to inscribe liberation, not a woman who entered the university with her own forms of personal power and agency." (p. 83) 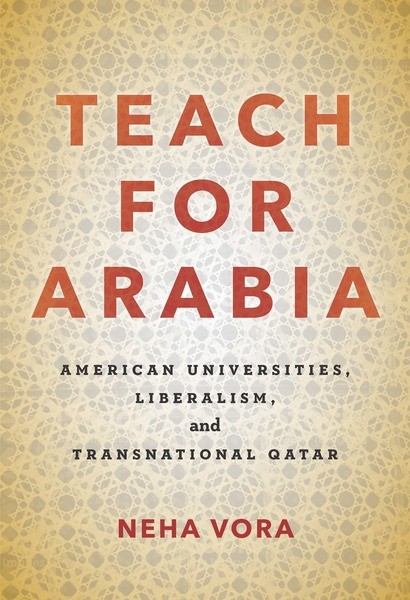