The Triumph of Injustice

Is there a tax collection problem? Are companies not paying their fair share? If so, how much? And, who cares? Is it just because they are smart, as Trump proclaimed when asked about his lack of paying taxes? The Triumph of Injustice: How the Rich Dodge Taxes and How to Make Them Pay (2019) by Saez and Zucman answer these questions (most of which is available and updated on their website. A few notes:

"At the heart of today's tax dodging lies a powerful and versatile technology: the offshore shell company. Popularized in 2016 by the revelations in the Panama Papers, the offshore shell company is like a multi-tool. It can be used to avoid estate taxes, capital gains taxes, ordinary income taxes, wealth taxes, corporate income taxes, withholding taxes on cross-border payments of interest, dividends, and royalties. It can also come in handy if you want to defraud the IRS, ex-spouses, children, business partners, or creditors. It's not unhelpful if your goal is to practice insider trading, launder money, pocket illegal commissions, fund an electoral campaign under the table, or finance terrorist groups. As an emblem of the zero-sum economy, the offshore shell has no rivals." (p. 63-64)

"In 2003, a year before it was listed as a public company in August 2004, Google sold its search and advertisement technology to its own "Google Holdings," a subsidiary incorporated in Ireland, but for Irish tax purposes a tax resident of Bermuda, an island in the Atlantic where its "mind and management" are supposedly located... In just one year, 2017 (the latest year available), Google Holdings in Bermuda made $22.7 billion in revenue. How so? Because it's the legal owner of some of Google's most valuable technologies. Google Holdings licenses the right to use its technology to Google's affiliates throughout Europe. (A similar scheme is used in Asia, with Singapore in lieu of Bermuda). Google's subsidiaries in Germany or France pay billions of dollars in royalties to Google Holdings for the right to use to so-called Bermudian technology, reducing the tax base in Germany and in France, and increasing it in Bermuda by the same amount. The corporate tax rate in Bermuda? Zero." (p. 75-75)

"A recent study estimates that globally, 40% of all multinational profits - profits made by firms outside of the country where they are incorporated, such as the profits made by Apple outside of the United States, or those of Volkswagen outside of Germany - are booked in tax havens today. This corresponds to around $800 billion in income earned in the United States, France, or Brazil that ends up being booked and taxed in the Cayman Islands, Luxembourg, or Singapore, usually at rates between 5% and 10%. In this war of all multinationals against all states, US multinationals appear to be the boldest: they shift not 40% (the world average) but 60% of their foreign profits to offshore tax havens each year." (p. 78)

"With tax avoidance reduced to a minimum, there's a wide consensus that increasing the amount of revenue collected from the wealthy is possible. But how much exactly? According to our computations, by about four percentage points of national income, or $750 billion a year in 2019." (p. 143)

"Among the many policies that can curb the power of established wealth and contain rent-seeking, the quasi-confiscatory taxation of very high incomes historically has proved effective. But it faces a major limitation: as we've seen, it's become too easy for the very rich to own a lot of wealth while reporting little taxable income. Reinstating a 90% top marginal income tax rate would not make a meaningful difference to the tax bills of many of America's billionaires. Overcoming this limitation requires taxing top wealth itself at high rates. A moderate wealth tax at a marginal tax rates of 2% above $50 million and 3% above $1 billion, such as the one discussed in the previous chapter, would generate a lot of revenue - about 1% of GDP each year, according to our estimates." (p. 173-174) 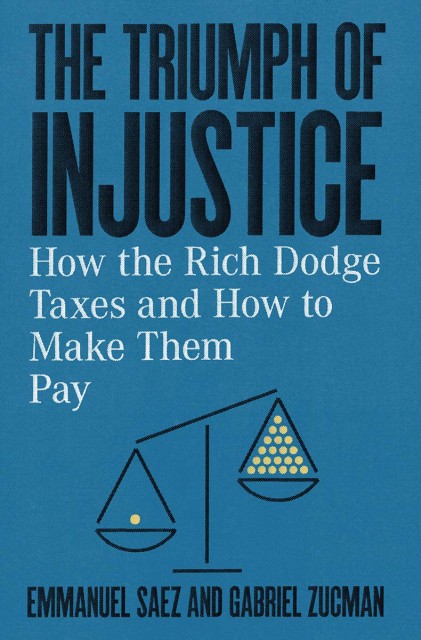