"Human rights talk constitutes one of the main elements in the ideological armoury of imperialism. Yet from the point of view of the African people, human rights struggles constitute the stuff of their daily lives. For these two interconnected reasons, human rights talk needs to be subjected to a closer historical and political scrutiny." (p. vii)

The above quote is drawn from the book "The Concept of Human Rights in Africa" (1989) by Issa G. Shivji (Professor of Law, University of Dar Es Salaam, Tanzania). Shivji writes with a fire that ignites. Parts are dated, as one would expect from a book published in 1989,  others remain provocative and topical for today. This is well worth a read for anyone interested in human rights, and in particular those looking for alternative voices on the subject. Chapter 1 (on the discourse) is reflective of the 80s, however the historical review of the legal basis of human rights remains important. The critique waged in Chapter 2 puts down "fundamental premises" and "political and ideological consequences of such a discourse on the anti-imperialist, democratic struggles of the broad masses", which inspire continued debate and discussion. The latter chapters, on the way forward and examples of dominant and revolutionary tendencies, is situated at the end of 1980s but provides examples for how analyses might be undertaken of more recent human rights agreements. This book was also published by CODESRIA (as a number of other books by African authors in the social sciences). Some quotes:

"Just as in the early Christian crusades it was legitimate to save the soul even if it meant trampling the body, so in the human rights crusade it was fair to protect rights even while napalming the humans. 'Human rights ideology' is an ideology of domination and part of the imperialist world outlook. Like other ideologies of domination in yester-epochs, the dominant human rights ideology claims and proclaims universality, immortality and immutability while promulgating in practice class-parochialism, national oppression and 'patronising' authoritarianism." (p. 3)

"Classical democracy is linked with the Western bourgeoisie which arose in Europe during the revolution that overthrew feudalism in, what have since been called, bourgeois democratic revolutions. The bourgeoisie marched apace and within a century transformed their countries of birth while marauding the rest of the world and planting its fangs all over the globe, including Africa. While unashamedly taking under its wings varied reactionary and backward social forces, from feudalists to zamindars and chiefs..." (p. 5)

"Since the second world war, human rights talk has been one of the central planks in the foreign and domestic ideologies of the United States. It is clearly expressed in the cold-war struggle with the Soviet bloc on the one hand, and in the oppression and domination of the Third World, including Africa, on the other. In some periods more intensely than others, the human rights ideology has been used by different regimes in the US on both these levels. In this regard it has played a double, if contradictory, role. On the international level, it is a rationalization for interference and intervention as well as domination of the Third World countries ('in the interest of democracy and free world') and on the domestic level it is an important element in reproducing the hegemony of imperial-bourgeois ideology by bolstering the image of the US as a country maintaining civilised human standards internationally." (p. 53)

"This should not come as a surprise to any African who has the slightest knowledge of reality beyond the thin veneer of official imperialist 'brain washing'. Who does not know that Mobutu, who gracefully presides over death and detention chambers of Zaire, was installed by the CIA? Who is so ignorant as to forget that the Lion of Juddah (Haile Selassie), who turned his country into a jungle where people in their thousands starved to death in fear and famine, was one of the greatest beneficiaries of US military arsenal? Many know that the US is one of the staunchest allies of [apartheid] South Africa; the military supplier of UNITA in Angola; the benefactor of dictators like Banda and Moi and the protector of Liberia's military nincompoop Samuel Doe. On the one hand, these facts are so well-documented that they need no repetition, yet on the other hand they have been so successfully suppressed in the mainstream human rights scholarship that they need to be broadcast from roof-tops." (p. 55) 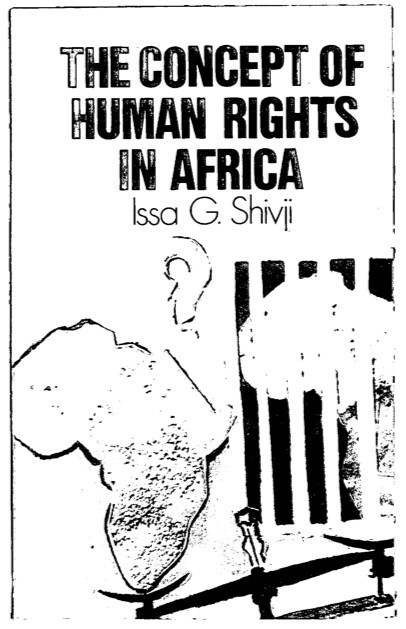