We tend to assume that democratic processes, norms and structures are 'sticky' and rarely 'die'. The cases we might think about are those that ended due to war and conflict, with the emergence of dictatorship in the form of fascism or military rule. In "How Democracies Die" (2018) Levitsky and Ziblatt provide a clear counter-narrative, and one seemingly much more relevant than the war and conflict narrative. In sum, that counter-narrative is: "Since the end of the Cold War, most democratic breakdowns have been caused not by generals and soldiers but by elected governments themselves. Like Chavez in Venezuela, elected leaders have subverted democratic institutions in Georgia, Hungary, Nicaragua, Peru, the Philippines, Poland, Russia, Sri Lanka, Turkey and Ukraine. Democratic backsliding today begins at the ballot box" (p. 5). It is democratic processes themselves being used to unravel themselves.

Many commentaries of late have focused on the power of the people, and their vote, as a way to ensure democratic processes reflect what people expect of them. Levitsky and Ziblatt suggest that there is more to understanding why democratic governance has been sticky in the American context: political parties, and specifically the gatekeeping involved in those political parties that kept outsiders and radicals out. To be clear, these political party gatekeeping processes were not democratic: "candidates were chosen by a small group of power brokers who were not accountable to the party rank and file, much less to average citizens" (p. 38). Oddly, non-democratic (often elite run and non-transparent) processes are held up as a key source for democratic continuity.

The authors also point out a gradual change of norms: "Democracies work best – and survive longer – where constitutions are reinforced by unwritten democratic norms. Two basic norms have preserved America's checks and balances in ways we have come to take for granted: mutual toleration, or the understanding that competing parties accept one another as legitimate rivals, and forbearance, or the idea that politicians should exercise restraint in deploying their institutional prerogatives" (p. 8-9). They continue, later in the book: "Some polarization is healthy – even necessary – for democracy. And indeed, the historical experience of democracies in Western Europe shows us that norms can be sustained even when parties are separated by considerable ideological differences. But when societies grow so deeply divided that parties become wedded to incompatible worldviews, and especially when their members are so socially segregated that they rarely interact, stable partisan rivalries eventually give way to perceptions of mutual threat. As mutual toleration disappears, politicians grow tempted to abandon forbearance and try to win at all costs. This may encourage the rise of antisystem groups that reject democracy's rules altogether. When that happens, democracy is in trouble." (p. 116) 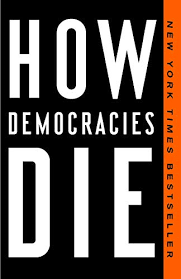