Writing anthropological and ethnographic research can be quite challenging. The experiences are so rich that one may not know where to begin and where to end. In "Two Arabs, A Berber and a Jew: Entangled Lives in Morocco" (2016), Lawrence Rosen provides an exemplary model for anyone grappling with these questions. To do so, he draws on experiences in Morocco over a period of nearly sixty years. The book weaves in a diverse set of literature, from history to political science and works of fiction. Many books are biographical in nature, and at first glance this book might appear to be the story of four lives, which is partly is. However, the author uses these stories to tell other stories (the first delves into Moroccan history, the second a sort of Moroccan cultural Islam 101, the third and fourth cover the lives and experiences of Berbers and Jews). For anyone interested in Morocco, this is an excellent book. And, for anyone interested in how good anthropological and ethnographic research can be made accessible to a broader readership, this is an important read. 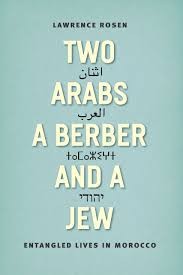