Nearly on a weekly basis during the Trump years we heard pundits proclaim something along the lines of "who saw it coming?!" While the specifics were not predictable, the trend was clear. One of those for whom the writing was on the wall was historian and public policy expert Nancy MacLean, who published Democracy in Chains: The Deep History of the Radical Right's Stealth Plan for America, in 2017. The book is contested, not surprisingly given its claims and highly political nature. For readers, approaching any book as being biased (by its topic, framing, research questions, etc) and engaging it critically is important. A few notes:

"In his first big gift to Buchanan's program, Charles Koch signaled his desire for the work he funded to be conducted behind the backs of the majority. "Since we are greatly outnumbered," Koch conceded to the assembled team, the movement could not win simply by persuasion. Instead, the cause's insiders had to use their knowledge of "the rules of the game"—that game being how modern democratic governance works—"to create winning strategies." A brilliant engineer with three degrees from MIT, Koch warned, "The failure to use our superior technology ensures failure." Translation: the American people would not support their plans, so to win they had to work behind the scenes, using a covert strategy instead of open declaration of what they really wanted." (p. xxii)

"The goal of the cause, Buchanan announced to his associates, should no longer be to influence who makes the rules, to vest hopes in one party or candidate. The focus must shift from who rules to changing the rules." (p. xxvii)

"...back in the county where Barbara Rose Johns first organized for fair treatment, and where officials continued to insist that they would abandon public education entirely rather than submit to "dictation" by federal courts, the Board of Supervisors voted a few weeks later to close the schools. That September, they padlocked every public school and opened new private schools for the white children while leaving some eighteen hundred black children with no formal education whatsoever. "It's the nation's first county," reported the Wall Street Journal, "to go completely out of the public school business." Local black youth remained schoolless from 1959 to 1964, when a federal court intervened to stop the abuse." (p. 72)

"Buchanan's experiences at UCLA left a far deeper legacy, one that ultimately explains why, in our time, governors and state legislators under the influence of the capitalist radical right have been moving aggressively to transform public higher education in states where they are in control. After 2010, as the Koch-funded project moved forward in the states, its representatives sought to slash their states' public university budgets while simultaneously raising tuition, ending need-based scholarships, limiting or curtailing tenure protections, reducing faculty governance, and undermining support for the liberal arts curriculum (particularly those parts of it most known for dissent)." (p. 103)

"In the view of the libertarian economist [Buchanan], Jesus was mistaken. Conscripting the Good Samaritan story, Buchanan made his case that "modern man [had] 'gone soft'": he lacked the "strategic courage" needed to restore the market to its proper ordering. By this logic, what seemed to be the ethical thing to do—help someone in need—was not, after all, the correct thing to do, because the assistance would encourage the recipient to "exploit" the giver rather than to solve his own problems." (p. 143)

"...it was Buchanan who guided Pinochet's team in how to arrange things so that even when the country finally returned to representative institutions, its capitalist class would be all but permanently entrenched in power. The first stage was the imposition of radical structural transformation influenced by Buchanan's ideas; the second stage, to lock the transformation in place, was the kind of constitutional revolution Buchanan had come to advocate. Whereas the US Constitution famously enshrined "checks and balances" to prevent majorities from abusing their power over minorities, this one, a Chilean critic later complained, bound democracy with "locks and bolts"." (p. 155)

"Many liberals then and since have tended to miss this strategic use of privatization to enchain democracy, at worst seeing the proposals as coming simply from dogma that preferred the private sector to the public. Those driving the train know otherwise. Privatization was a key element of the crab walk to the final, albeit gradual, revolution—the ends justify-the-means approach that allowed for using disingenuous claims to take terrain that would make the ultimate project possible." (p. 182) 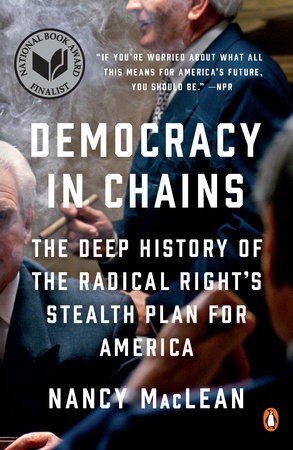