State and Land in Ethiopian History

Richard Pankhurst (1927-2017) is one of the most prolific historians of Ethiopia, described by the Foreign Minister as "one of Ethiopia's greatest friends." One of his earlier works is "State and Land in Ethiopian History" (1966). As expected from those familiar with Richard Pankhurst, the book offers insight into history that appears otherwise to be lost. This book challenges the idea that land tenure policy in Ethiopia has been relatively uniform, he writes: "Ethiopia's long history, so far from being as is often imagined an unchanging saga, witnessed many significant events and far-reaching political, economic and social transformations" (p. 211). For anyone interested in Ethiopian history, governance and land, this is a book well worth finding a copy of.

Available information on the earliest centuries are relatively limited, but Pankhurst utilizes what is available to explore the changes of government and land tenure. "Throughout the vicissitudes of the last half millennium the Ethiopian State devoted much of its attention to questions of land tenure. The rulers of former times on adopting Christianity made large-scale gifts of land to the church and used their extensive power to allocate lands to their followers as the basis of their system of government and administration, land being indeed made available to persons in all walks of life" (p. 211). The book is divided by era, with the chapters becoming increasingly longer as more records become available.

Regarding land tenure, I found the section on Tewodros particularly interesting – not only the attempts of land tenure reform, but the reasons for it as well as the causes of its failure: "The great reforming Emperor Tewodros or Theodore II (1855-1868), attached major importance to the land question in all its ramifications. One of the first reforms which he attempted was to prevent the soldiers from looting the peasants as they had done from time immemorial…Despite his good intentions Tewodros was unable either to inaugurate an era of peace or to establish a paid army which could be relied upon not to ravage its compatriots" (p. 93-94). The author continues: "Tewodros also attached considerable importance to land reform. On gaining control of Shoa he at once endeavored, doubtless in an effort to consolidate his power, to reform the system of tenure in that province by granting the people greater security of tenure than had hitherto existed. Alaqa Walda Maryam's chronicle says that in February, 1856, the Emperor issued a proclamation which appears to have been designated to institute a kind of private property in Shoa. It decreed that land should belong to those whose fathers had already held it as fiefs and that persons without any such claim to property should look to the Emperor as their father. Though this edict is said to have been universally acclaimed, we are told there was no one in Shoa who did not claim land or pretend that this or that piece of it had belonged to his father; this resulted in so many land disputes and quarrels that Tewodros was obliged to issue a new decree reinstating the old institutions" (p. 94).

This book is not only about land tenure. The topic provides insight into a range of other political and social issues. Consider: "The importance of such claims [Solomonic lineage] appears to have also be recognised by Ras Ali, the [removed] ruler of Bagemder and his mother the Empress Manan. Budge declares that this wise lady knew that "sooner or later the people would rise against him… because he did not belong to the Solomonic line". She therefore "ordered the genealogists of the royal house to search for proofs in their archives that Ali was a descendant of Solomon and the Queen of Sheba. Naturally the scribes discovered documents which proved beyond all doubt that Ali was a legitimate occupant of the throne, and they produced a pedigree which satisfied their astute mistress." (p. 19) 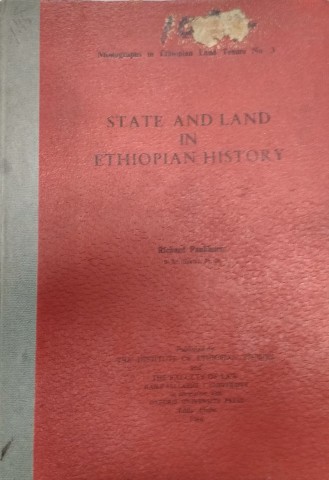