Want a post-internet, post-elitist update to Alinsky's "Rules for Radicals"? Here it is: "Rules for Revolutionaries: How Big Organizing Can Change Everything" (2016) by Becky Bond and Zack Exley. The book is about 'big organizing' which the authors say "isn't just about the effective use of the newest technology to scale participation in politics. As the most fundamental level, big organizing is how we create campaigns that allow people to work together to realize their dreams for a more just world. Big organizing is big is more ways that one. We have to have a meaningful message and big goals. Instead of asking for the change that politicians think is possible, we have to ask for the change that is actually needed to solve problems" (p. 5).

Some of their experiences and tips:

And some valuable, concluding reflections: "Revolutions are messy, wonderful, maddening, and joyful all at once. They alternative between inspiring unbelievable elation and taking your heart and crushing it in a vise, sometimes both in the same day. Revolutions rarely succeed immediately. But when they do achieve their ultimate goal – even when it seems sudden – it's usually a result of years of accumulated confidence, new tactics, and momentum. All of this is gained through defeats and setbacks that train and galvanize an ever-growing base of people who believe that change is possible if they all stand up and fight for change together." (p. 183) 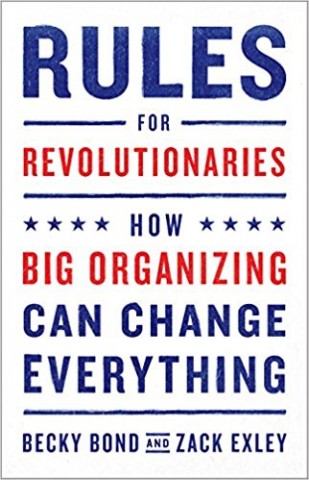