Indigenous Pathways of Action and Freedom

Taiaiake Alfred's "Wasase: Indigenous Pathways of Action and Freedom" (2009) was recommended to me, as I sought out a book (or parts of a book) that might be used to introduce undergraduate students to ethical and justice issues of colonialism in Canada. In some ways, it is similar to Ngugi's work on decolonizing the mind, and in some ways it is similar to Smith's work on decolonizing methodologies, but it is also quite different. The author says that "Wasase is a book that speaks to the imperceptible way that European thought has polluted the minds of Native Americans resulting in cultural blanks. It speaks to reflection: reflection on that pollution. It speaks to revitalization: revitalization of the "Warrior's Way" which is the only way Native Americans will be able to find their way out of the colonizers quagmire" (p. 11).

At points, the book presents forceful challenges to Settler and colonial society, drawing on Memmi and Fanon. Taiaiake presents an "ethical and political vision, the real demonstration of our resolve to survive as Onkwehonwe [first people] and to do what we must to force the Settlers to acknowledge our existence and the integrity of our connection to the land" (p. 19). The way forward, the book outlines, is challenging because the "political and social institutions that govern us have been shaped and organized to serve white power and they conform to the interests of the stats founded on that objective. These state and Settler-serving institutions are useless to the cause of our survival" (p. 20). In a longer passage, the author writes:

The passion and forcefulness of the opening pages is somehow softened as the book develops the ideas. For example, one might read the above passages as calling for violence as a means to achieve the objective, but that is generally opposed. The place of Settlers, one might assume, is better elsewhere, but that too is clarified: "When we say to the Settlers, "Give it back," are we talking about them giving up the country and moving away? No. Irredentism has never been the vision of our peoples. When we say "Give it back," we're talking about Settlers demonstrating respect for what we share - the land and its resources - and making things right by offering us the dignity and freedom we are due and returning our power and land enough for us to be self-sufficient." (p. 153). One wonders if the inclination to approaches that might be considered within the realm of reconciliation are forgetting the monster Taiaiake introduces readers to?

On language and labels, Taiaiake explains that many "Onkwehonwe [first people] today embrace the label of "aboriginal," but this identity is a legal and social construction of the state, and it is disciplined by racialized violence and economic oppression to serve an agenda of silent surrender... The integrationist and unchallenging aboriginal vision is designed to lead us to oblivion, as individual successes in assimilating to the mainstream are celebrated, and our survival is redefined strictly in the terms of capitalist dogma and practical-minded individualist consumerism and complacency." (p. 23) 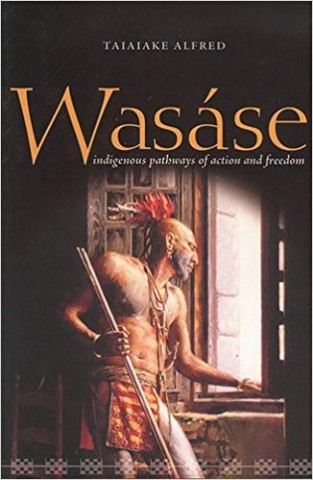