How Philanthropy Fails to Alleviate Poverty

Erica Kohl-Arenas' new book, "The Self-help Myth: How Philanthropy Fails to Alleviate Poverty" (2016) offer strong criticism of philanthropic work, by asking "Can the surplus of capitalist exploitation be used to aid those on whose backs this surplus is generated? Can these surplus dollars contribute to addressing entrenched poverty while refusing to address systematic questions of labor, migration, and human rights?" (p. 36). Quote for this edition of the "thought provokers" series offers interesting food for thought, and space for critical reflection:

While the author continues to work in the sector, and with funders, she argues the prospects for transformative change appear minimal. She concludes, "on the one hand, this research confirms the expected – that private philanthropy will not fund projects that attempt to make significant changes in the economic sphere or address the structural causes of poverty and inequality" (p. 74-75). However, the book also offer nuance, the author continues: "On the other hand, a story of top-down co-optation and control, as presented in much of the critical philanthropy scholarship, is insufficient in explaining the relationship between the movement and funders in that it neglects the complicated negotiations between foundations and movement leadership." (p. 75). 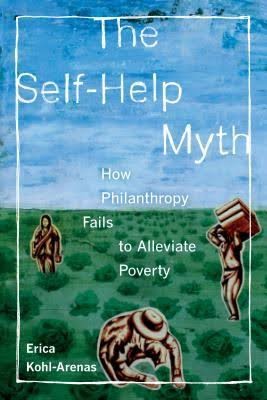