How Migration Shaped Our World and Will Define Our Future

​Open doors or build walls? Immigration is one of the most politicized issues. Thus, the value of the book by Goldin, Cameron and Balarajan (2011): "Exceptional People – How Migration Shaped Our World and Will Define Our Future". Before delving into the detail, this book was likely written for an undergraduate audience – those moderately well read on migration will find the first two sections ("Past" and "Present") a summary of the literature. The third section ("Future") offers some interesting food for thought that draws from the literature. It is also worth emphasizing that this book was published in the year the Syrian Civil War started, before the large movements of people into Europe and well before Trump began promising walls and bans.

In the introductory remarks, the authors make clear their position: "International migration pays dividends top sending countries, receiving countries and migrants themselves. In receiving countries, it promotes innovation, boosts economic growth, and enriches social diversity, and is a boon for public finance. Sending countries have their economies stimulated by the financial and social feedback of migrant networks. Migrants reap the welfare benefits of higher wages, better education, and improved health when they move to relatively more developed countries. High rates of migration do, however, produce costs that are carried unevenly by particular localities and countries. These costs are often short-run, and they can be reduced through resource transfers and by building the capacity of public institutions to manage the social and administrative changes presented by higher rates of migration" (p. 5-6). Later chapters (e.g. 6: Impacts of Migration), confront assumptions and assertions with evidence, which has a tendency to emphasize the positive and downplay the negative, but nonetheless makes a strong and clear case for the important, and positive, role that migration has played, and will continue to play, globally.

The first part of the book ("Past") provides an overview of migration in human history. One notable point in reflecting upon history is the novelty of citizenship and immigration restrictions in the modern sense: "Throughout the development agrarian civilizations and the emergence of the first states and empires, borders were porous, and cross-cultural encounters were intermittent but far from uncommon. Cross-cultural interaction was a primary stimulus for the growth of commerce, the spread of ideas and religion, and the advancement of civilizations" (p. 28). Yet, the value of ideas moving with people began to have less of an impact because "somewhere around 1000 CE, world history began to shift from a pattern of divergence – or separate development of civilizations – toward a pattern of global convergence. Up until this time, migration had virtually always meant a permanent departure from the home community. Around the turn of the millennium, however, the accelerating tempo of cross-civilization commerce was launching transoceanic journeys and satellite communities that were the first tremors of globalization" (p. 32). Thus, a shift occurred from migration being an important way for ideas to move, toward migration as an important way for labor and innovative people to move.

It was not until recent centuries that the world of regulations, quotas and applications took shape: "The twentieth century would witness rising nationalism accompanied by a system of states increasingly capable of monitoring their borders. As migrant destination countries received people from ever more diverse locations – and often with fewer skills – native residents demanded greater management of migration flows by the state. Opposition to migration was commonly xenophobic or racist, and prejudices toward foreigners were inflamed by economic downturns and unemployment. The defense of perceived national interests through rising economic protectionism in the early twentieth century was extended to migration control" (p. 67-68). An interesting contribution this book offers, at least in my perspective, is how many nations (e.g. West Germany) used temporary worker programs, and much might be learned from these for the expansion of such programs in countries like Canada today.

Migration is "a key driver of human and economic development and that our future will be strongly influenced by policies regarding migration. How governments craft and coordinate migration policy will determine whether our collective future is defined by a more open and cosmopolitan global society or one that is unequal, partitioned, and less prosperous" (p. 2). What do the authors see for the future (from the vantage point of 2011): "all the evidence tells us that the first half of the twenty-first century will be characterized by more migration… By the middle of the twenty-first century, our societies will be more diverse than ever before" (p. 213). Yet, some caution of what this increase entails: "The dramatic forecasts of as many as 200 million "environmental refugees" by 2050 have been widely cited in official reports, but they have not held up to wider scrutiny. We believe it is unlikely that climate change alone will lead to a tenfold increase in the number of refugees and displaced persons, and doubling of the total number of migrations, as implied by these guesstimates" (p. 237). The authors note that the "'pressure points' include intercountry inequality and wage disparities, growing working-age populations in many developing countries, and environmental stress. More people will have the capacity and propensity to move because of economic growth in poor countries, urbanization, and rising education standards" (p. 241). Additionally, "developed countries are already witnessing a contracting in the supply of native low-skilled labor, a trend that will continue into the future… Without increased migration, these labor shortages will generate a long-term drag on the economies of developed countries" (p. 250).

What then to do – what policies and approaches do the authors recommend – on the question of open doors or walls? They conclude: "We propose five key principles that should guide engagement with migrants and migration by governments and international organizations: extend transnational rights; promote social and economic advancement for migrants; widen the umbrella of legal migration; combat xenophobia and migrant abuse; and improve data collection" (p. 272). Each of the principles is outlined in detail within the book. 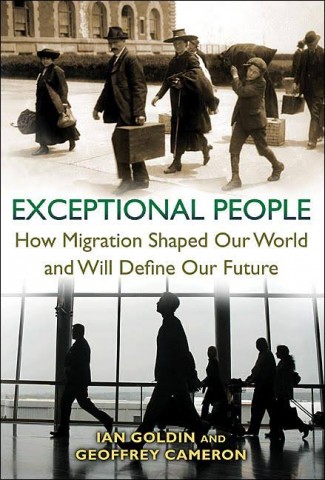 Funding: Mobility, Displacement, and Forced Migration in the Middle East