Governments, activists, NGOs, politicians and development programs all want change. It is why donor dollars are raised and people protest in the streets. But, how much do we actually know, or reflect upon, how change actually happens – and to what extent is that embedded within how development works? "How Change Happens" (2016) by Duncan Green, blogging celebrity of From Poverty to Power, seeks to answer these questions. The book is available open access, as is the author's last book, From Poverty to Power (2012). It is "for activists who want to change the world" (p. 2), but the author does not offer a manual for change. "Indeed one of its conclusions is that reliance on checklist toolkits is on the things that is holding us back. Instead it offers a combination of analysis, questions, and case studies, with the aim of helping readers look afresh at both the obstacles and the enthralling processes of change going on all around them, and to gain some new energy and ideas about how to contribute" (p. 5).

Avid followers of Duncan's blog will encounter some familiar terrain. I have not focused on the norms and institutions that make up significant parts of the book, rather upon a selection of specific points that I think contribute in unique ways to the conversation about how change happens, starting with a reminder for those skeptical of any change at all: "People seeking change are often impatient, intent on addressing the problems of the world. In the words of one of the greatest activists of them all, they are consumed by 'the fierce urgency of now.' From the perspective of 'now', institutions appear to be permanent and unchanging; in fact, they often depend upon that appearance for their credibility. But 'now' is merely a moment on the continuum of history, and history shows us that the status quo is far less fixed than is appears" (p. 75).

Green offers a sufficient amount of detail to challenge notions of simplicity found in the toolkits and checkbox lists, without burdening readers with drawn out contextual information. For example: "In fragile states, where power resides mostly in outside the state, activists may be better off working at a local level, with municipal officials and non-state bodies like traditional leaders and faith groups. In developmental states, engaging directly with efficient bureaucracies, using research and argument rather than street protest, often makes for a better (and safer) influencing strategy than challenging politicians… In more patrimonial systems, the best influencing strategy may be to network directly with those in power" (p. 91). The book is full of similar short notes that provide food for thought and illuminate points with examples that may not have been considered.

Politicking and creating political parties are not often priorities on the list of activists. Yet, Green argues that some successful "social movements organize as parties because as movements they tend to rise and fall in sudden bursts of protest and can rarely muster the long-term engagement with the state required to achieve lasting change. What's more, civil society organizations find it hard to make any legitimate claim to represent the will of the people because no-one has elected them" (p. 116). At the same time, not all movements and organizations should become political parties. "Civil society can help the state become more effective, and states can in turn promote citizen activism by addressing" different kinds of power (p. 190). Thus, civil society itself has an important function outside of politics. The author has weaved diverse examples throughout to demonstrate different pathways to how change can occur, rather than promote a specific action (although a particular approach – the power and systems approach is promoted as a means to help determine what pathway(s) ought to be taken). Indeed "the range of possible advocacy tactics is limited only by the imagination of the advocates"(p. 217).

At the outset, Green writes that he "was moved to write this book by a combination of excitement, fascination, and frustration" (p. 1). The self-reflective style of writing is engaging, particularly when Green grapples with the intersection between excitement, fascination, and frustration. For example: "Based on research in Pakistan, Masooda Bano argues that aid often erodes the cooperation that underpins CSOs. When foreign money flows in, the unpaid activists that form the core of such organizations can lose trust in their leaders, whom they now suspect of pocketing aid dollars. In Bosnia, my conversations with CSOs suggest that even their supporters view them as little more than 'briefcase CSOs', only interested in winning funding. I find such conversations painful, as they force me to acknowledge that the aid dollars Oxfam has spent so many years advocating for can in some circumstances do more harm than good" (p. 192).

I found the commentary on the role of leadership an important addition. As Green notes "aid technocrats avoid discussions of leadership, because it rapidly gets political and clouds the seductive purity of 'evidence-based policy making'" (p. 199). Activists too "tend downplay the role of leaders and leadership in driving change. Development studies as a discipline has little to say about the Big Man in the presidential palace, and even less about leadership from below" (p. 198). Green writes: "Part of the art of outstanding political leaders such as Gandhi or Mandela lies in their ability to go beyond merely reflecting public norms and instead influence them for the better. Even the endless reception of simple messages, which may be one of the most off-putting aspects of politicians' daily lives, helps challenge old norms and cement new ones. Of course, politicians can also reinforce norms that should change, for example, by whipping up hatred against ethnic or religious minorities or desperate migrants" (p. 53-54). There are some emerging program supporting emerging leaders, but these remain few and far between, and often ones that support established leaders rather than strengthen the skills, network, capacity and opportunities of emerging ones.

Duncan Green is hopeful that the simplified narratives of complex realities, remedied by simple solutions, are (slowly) changing. Different approaches to storytelling show that the good/bad narrative is not the only means to tell an effective story (although certainly it has been used to tell compelling ones, even if they are not entirely factual). "Such narratives squeeze out the more nuanced views of local people and the deeper, underlying causes of conflict, and end up promoting superficial victories rather than real change" (p. 223). I am somewhat less optimistic that the messier stories of complex systems and power will have the same broad appeal as the simple ones – but such stories need not always have broad appeal and strategic approaches might be tailored as we navigate from simplicity to complexity. 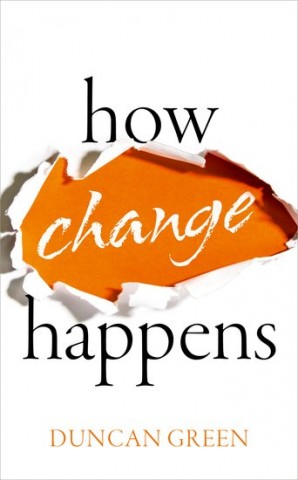