​Rural live in Ethiopian history is largely absent in the historical record – historians are able to work with a wealth of material from the long written record in the country, but these tends to only reflect a small segment of society. James McCann's "From Poverty to Famine in Northeast Ethiopia: A Rural History 1900-1935" (1987) provide important insight into the everyday lives of rural people, as well as the conditions and changes that pushed people living in poverty into famine. A unique contribution made by the author is the role of the state – not its absence per se, but its presence in over taxing rural residents. 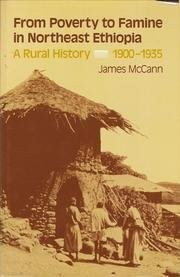